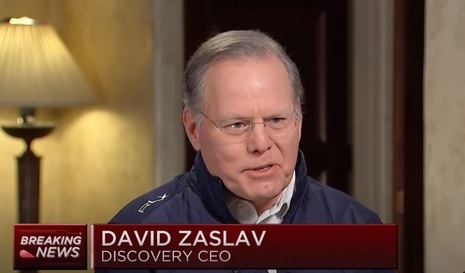 Is he high? Is he somehow unaware of CNN's last five years of bomb-throwing anchorman lectures and editorializing "Reality Checks"? Did their nasty and loaded liberal "town halls" (think Parkland, for one) suggest they were just "Facts First"?

Naturally, we could attempt to read corporate minds and say Zaslav is trying to boost CNN's brand in front of investors. Brian Stelter was pleased to report Zaslav praised CNN at length on Tuesday’s call, calling it “the best journalistic organization in the world” and saying “we’re fully committed to it.”

That's happy talk after they quickly dumped out CNN+, but that writing was on the wall before foolish executives launched the doomed streamer.

“The ability to provide journalism and facts are the foundation of a civilized society,” he closed his comments during the Q&A. “Advocacy networks [Fox News, MSNBC] are a great business, but CNN is in the business of journalism first. And it’s a really good business. Because we own it. Sports is rented. What Ted Turner tried to create is really meaningful.

CNN has not been doing "journalism first." Last August, our study of cable news found CNN spent 72 percent of its "news" time on opinionated programming or panel discussions. That was a bit higher than Fox or MSNBC, but it's not "journalism first."

Tuning down CNN hot takes like "Trump is worse than Hitler, Stalin, and Mao combined" would sound more civilized. We could be optimists and say Zaslav is nudging CNN toward a more-news/less-opinion approach. But it's pretty lame to insist that it's some kind of all-news hero right now.

Zaslav also gushed about CNN's Ukraine coverage. "Ultimately when there are war trials, Exhibits A, B, C, and D [from Ukraine] will be from the great work CNN has done.”  There's a pretense in there that CNN is America's news leader on global news. But obviously, since the Russians invaded Ukraine, viewer habits have remained steady. Fox News has double the viewers that CNN has and they also have reporter boots on the ground in Ukraine.