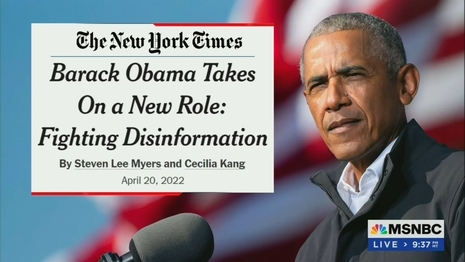 The New York Times sounded a little giddy on the front page of its Business section April 21 with the headline “Obama Joins Fight to Curb Online Lies.” This spin strongly suggests Obama never lies. He’s a valiant warrior against lies.

That came after a badly disguised press release at CNN.com on Obama “urgently throwing himself into the fight against disinformation.” As usual, they make it sound like a superhero has landed when he arrives on the scene.

Never mind PolitiFact giving Obama the “Lie of the Year” in 2013 for “If you like your health care plan, you can keep it.” Never mind Obama’s bald-faced lies in 2012 that the Benghazi consulate attack wasn’t a terrorist thing, it was a protest of an Islamophobic YouTube video that got out of hand. As if the Islamic radicals brought grenade-launchers to a “protest.”

Times reporters Steven Lee Myers and Cecilia Kang offered a narrative that social media sites seemed like a force for good when they helped elect Obama, and then turned malignant as Trump ascended. Their story began with Obama “yukking it up” in 2011 with Facebook founder Mark Zuckerberg.

“As an apostle of the dangers of disinformation, Mr. Obama might be an imperfect messenger,” they wrote. He rode social media to victory, “but then, as president, did little to intervene when its dark side – propagating falsehoods, extremism, racism and violence – became apparent at home and abroad." Obama rehashed “whether he had done enough to counter the information campaign ordered by...Putin to tilt the 2016 election against Hillary Rodham Clinton.”

They don’t blame Hillary for losing. They blame Putin. Disinformation was suddenly “eroding democracy” just as the Democrats lost the White House.

President Obama took his old friend Zuckerberg aside right after the 2016 election to warn “he needed to take the problem more seriously.” This is exactly how and when our liberal media finds the urgency to fight “disinformation.”

The Times touted an Obama keynote speech at a Stanford Cyber Policy Center event. When Obama spoke on this subject recently at the University of Chicago, no “independent fact checker” checked the veracity of his information, like his revisionist claims about being tough on Russia as president. They’re not “independent,” and neither are the social-media sites that use them to curb conservatives.

Nowhere in the Times article or in the CNN piece was there any mention of the Hunter Biden laptop, which the liberal media and Big Tech rashly ruled was “disinformation” in the last weeks of the 2020 campaign. That story was squashed on the internet. On March 17, the Times admitted – deep in an article on page A-20 – that it’s authentic information. Even now, CNN can’t handle the truth. Reporter Paula Reid produced one story on March 30 (which aired several times) still saying the laptop was “purported to belong to Hunter Biden.”

So the question for CNN and The New York Times: Can you admit now that the New York Post didn’t report “online lies” on Hunter’s laptop? Can the media have any humility about the idea that sometimes conservative journalists can ferret out and verify information they don’t like? That if it’s not “disinformation” if it’s accurate, but may help Republicans? If not, they have no moral standing to prance around like heroes fighting “disinformation.”