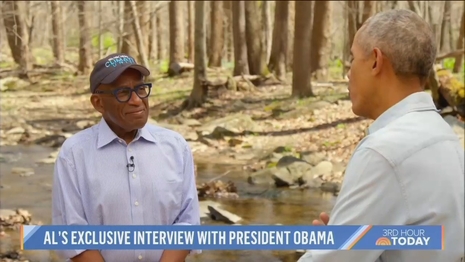 Whenever Barack Obama grants an interview to one of his adorers in the media, one who arrives bathed in the glow of servility, everyone should be reminded that this is a major reason why people don’t trust the media.

In every interview, Obama is treated as a global celebrity and as the wisest of wise men. One can understand a journalist offering more tender inquiries to an ex-president, but there is no difference in tenderness between now and during his presidency.

Look no further than NBC’s Obama interview by weatherman Al Roker, which aired on April 12 and 13. “Scrutiny” or “accountability” are not words that apply. NBC and the other liberal media outlets seek to put Republican presidents on trial, and put Democrat presidents at ease.

Obama is promoting a new Netflix series he’s made on America’s national parks. Roker, as usual, was thumping the tub for “climate change solutions.” Roker announced to Obama: “During your presidency, you protected more public lands, more waterways, than any previous administration. Now that you are a private citizen, is climate change and the environment one of your top priorities?”

This sticky fistful of cotton candy allowed Obama to strike a pose for humanity: “I think it has to be one of the top priorities for all of us. I don't want to leave that kind of legacy for my kids and my grandkids. And I don’t think any of us do. And that means that we’ve got to get to work.”

In another clip, Roker complained that “climate is one of those things that gets pushed down when things happen. For example, now we’ve got Ukraine and there’s talk about, ‘Let’s ramp up production of fossil fuels because, you know, inflation, higher gas prices.’ Do you worry that that’s gonna push back the initiative?”

Thousands are being killed in Ukraine, and Roker’s more worried about a delay in getting rid of gasoline-powered cars. Obama declared the war “argues for us redoubling our efforts to wean ourselves off fossil fuels.”

Roker wouldn’t ask Obama about the mental clash of flying in a jet to Europe to preach to the United Nations climate conference organized to “wean ourselves off fossil fuels.” That would be a “gotcha question.”

In the same vein, no one expected Roker to press Obama on why Putin would invade Ukraine when he was president, and then again when Biden was president, but not under Trump.

Roker also offered a soft question about “What do you think’s gonna happen in this midterm election?” Obama gave the expected partisan answer. “The Biden administration has overcome some extraordinary circumstances” with COVID, the economy, and Ukraine. They overcame it all? Or they’re demonstrating they aren’t solving any of these problems? Obama insisted “they have handled the policy right.”

The NBC crowd would consider it “misinformation” to argue the Democrat war on fossil fuels has led to the surge in gas prices. Roker goes on television to present Obama and Biden as men who solve problems, and never create them. He wouldn’t think of raising an eyebrow as Obama says the policy right now is the right thing.

When Obama was inaugurated, Roker said to his NBC colleagues “I had tears in my eyes.... It was a moment that I think this entire country is sharing.”

These journalists always seem to think every single American is a liberal who rejoices when Democrats take over. That delusion leads to interviewing Obama as if he’s still so inspirational that all of us are on the verge of tears. Then they can’t understand why people don’t trust the media.