Michael Isikoff, once the top investigative reporter for Newsweek, tweeted something unintentionally humorous about a New York Times story. 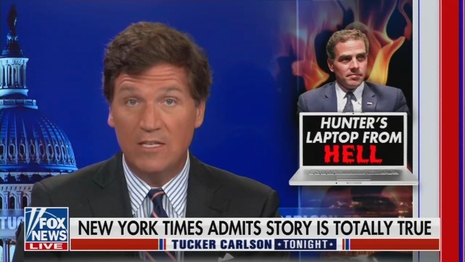 “In the category of -- didn’t see this coming,” he wrote, “The @nytimes confirms the authenticity of Hunter Biden emails derived from his laptop that had been previously dismissed as Russian disinformation.”

The obvious joke about “didn’t see this coming” is that Hunter Biden’s laptop is one of those scandals that they would prefer to squash until about 2028. In October 2020, Twitter and Facebook heavily censored New York Post stories on Hunter Biden’s laptop with the excuse that "security officials" (guess which party) cried "Russian plot."

As columnist Tim Carney notes, it’s late for griping about Big Tech censorship back then, but it still underlines the question “Just what are the tech platforms and the major media colluding to lie about right now? What are our gatekeepers covering up today?”

Let’s add to that: Why is a news story “illegitimate” until “prestige media” outlets arrive on the scene years after the original conservative scoops? The Times story was buried on page A-20 of the print edition on St. Patrick’s Day.

In the second half of paragraph 23, the trio of Katie Benner, Kenneth Vogel, and Michael Schmidt announced the Times obtained the emails “from a cache of files that appears to have come from a laptop that was left abandoned by Mr. Biden in a Delaware repair shop.” Appears?

The Hunter Biden story was blandly blurbed on the bottom of the front page as “Biden’s Son Pays a Tax Bill.” It sounded as harmless as a kiddie book like Curious George Saves His Pennies. The TV networks yawned and reported nothing.

The headline inside also said “Biden’s Son Paid Off Tax Bill, but Still Faces Inquiry by Grand Jury.” The Times couldn’t even note in the blurb or headline that the tax payoff was said to be more than $1 million. We’re told that paying off your (huge) tax liability is one way to make it harder for prosecutors to win a criminal conviction for tax avoidance.

Hunter Biden is also being investigated for failing to register under the Foreign Agents Registration Act (FARA) in all of his international exploitation of Vice President Daddy. The Times reported that the laptop emails show Hunter was sensitive to avoiding any FARA problems.

In his dealings with the Ukrainian oil-and-gas firm Burisma, Hunter recommended enlisting the law firm where he worked at the time, Boies Schiller Flexner, to “devise a media plan and arrange for legal protections and mitigate U.S. domestic negative press regarding the current leadership if need be.”

One wonders if they really needed much help in “mitigating negative press” with the New York Times and the rest. Maybe they meant conservative outlets like Fox and the New York Post.

At the end of the story the Times reported on prosecutors meeting with a “former employee of Mr. Biden’s, Lunden Alexis Roberts,” asking “which corporate entity” Hunter used to pay her for...nine months. This is obfuscating the woman who the racier New York Post described as Hunter’s “baby mama” the “stripper.” Roberts, who once danced at the “Mpire Gentleman’s Club” in D.C., has a three-year-old daughter fathered by Hunter named Navy Roberts. The little girl was unsurprisingly left out of the grandchild stockings on display at the White House last Christmas.

This is where you laugh at reporters who boast that “our only bias is in favor of a good story.” Juicy stories dry up and waste away all the time when they’re about Democrats.