National Public Radio broadcast ten minutes of an interview with Secretary of State Antony Blinken on Wednesday's Morning Edition. We pointed out a year ago that NPR's approach was night and day on Trump's top diplomat Mike Pompeo versus Biden's man Blinken. Anchor Steve Inskeep asked bland questions and then let Blinken answer for minutes on end without interruption. Some of this was posted on YouTube:

His first question was "Do we need to be prepared for the reality of the continued destruction of Ukrainian cities?"

But this part wasn't in the YouTube. At about the eight-minute mark in the NPR segment, Inskeep began worrying out loud about how the government would need to "counter" Russian propaganda on American television (let's guess he means Tucker Carlson):

INSKEEP: How, if at all, does the United States intend to counter voices at home who have routinely repeated Russian talking points on TV?

BLINKEN:  Well, Steve, happily, in my job I don’t do politics.  I certainly don’t do domestic politics.

But what we have seen is this – or at least what I’ve seen is this.  I’ve spent a lot of time talking to members of Congress.  There’s incredibly strong bipartisan support for this effort, the effort to support Ukraine, the effort to punish Russia for what it’s doing and put pressure on it.

Assembling bipartisan support for Ukraine is "domestic politics" (about foreign policy), so it's a little odd to say a Secretary of State doesn't do politics. Blinken's engaged in "domestic politics" by granting interviews to liberal outlets like NPR. Inskeep repeated his inquiry about pro-Putin pukes in the press and the GOP: 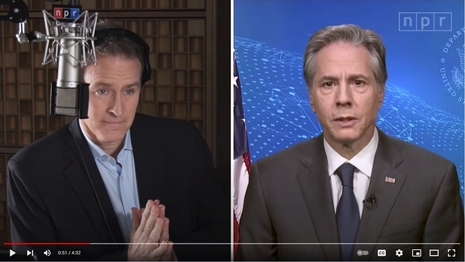 INSKEEP: You don’t need to worry about the wing of the Republican Party that has been openly sympathetic to Putin over the years?

BLINKEN:  Again, I don’t do politics at home.

That's funny, Time magazine under (future Obama State Department aide) Richard Stengel made Putin their "Man of the Year" in 2007, saying he was not a good guy, but had done "extraordinary things," and "that's why Russians adore him."

PS: Blinken spoke about the Fox News crew members who were killed on the job in Ukraine:

We’re also seeing journalists in the crossfire, people doing their jobs to bring the truth to the world.  We’ve seen a Fox team that was – had two of its members killed, one injured, someone I know very well.  This is Ben Hall.  He’s someone who travels with me when I travel around the world, someone I have great affection for, who’s a tremendous reporter who asks me a lot of tough questions every place we go.  I’m very much hoping and praying that he’ll be back on the job as soon as possible, but meanwhile two of his colleagues lost their lives in this attack, and another very prominent filmmaker lost his life just the other day.

It's good to hear that Hall is okay and has left Ukraine. But it's obvious that NPR and Inskeep are not the kind of media outfit who ask Blinken a lot of tough questions. It sounds like state-run radio when Democrats run the executive branch.