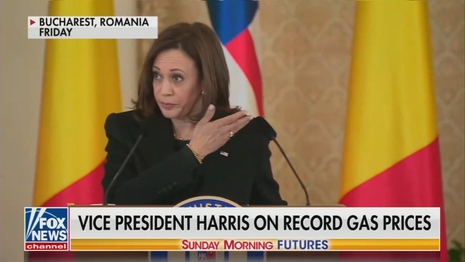 On her tour of Europe, Harris acted strangely in answering questions at joint press conferences. With Polish President Andrzej Duda, they were asked two questions in tandem, and she tried to defer answering first, then bizarrely laughed (over a question about Ukrainian refugees). With Romanian President Klaus Iohannis, she was asked a similar question-in-tandem, and again tried to defer answering first (about gas prices).

Fox host Maria Baritoromo cued up a clip: "Here’s Kamala Harris with really no answers when asked about gasoline prices. Watch how she responds, look." Fact check? True, her answer was a word salad.

MILLER: It was a heart-stopping moment. She was asked about gasoline prices and inflation in America and she tried to defer to President Duda, the Polish president. It is truly horrifying to think that the vice president of the United States lacks confidence so extremely on our domestic issues that she wants the president of Poland to discuss our gas prices and our inflation. And then she starts stammering about the Black Sea and reading her notes. This is not a well person. Between President Biden and Vice President Harris, the United States is completely rudderless.

Miller said that Vice President Kamala Harris tried to defer to the Polish president when asked a question about high gas prices in the U.S.

He’s wrong on both counts. Harris was speaking in a joint news conference with the president of Romania, not the Polish president. And the video clip played before Miller’s criticism edited out the first part of the question to Iohannis. The two leaders paused to determine who would answer first, not because Harris wanted him to answer about U.S. gas prices.

We rate this claim False.

First, it's true that Miller cited the wrong European president, but it's obvious from the video that Harris tried to defer to the Romanian leader. You go first!

But as usual, the real issue is selection bias. Why is this small flub in a video clip worth a fact check? PolitiFact rarely checks CNN or MSNBC shows (because they're all liberals). Last week, a guest told Rachel Maddow's substitute host Ali Velshi the embarrassing falsehood that "Hitler didn't kill ethnic Germans," which was corrected by the Auschwitz Memorial people, but PolitiFact somehow couldn't locate that viral clip.

It seems obvious that PolitiFact is trying to whack Fox News as a misinformation channel and control the damage of these strange Harris performances in front of the press. They also failed to question this Harris flub implying wrongly that Ukraine is a member of the NATO alliance: