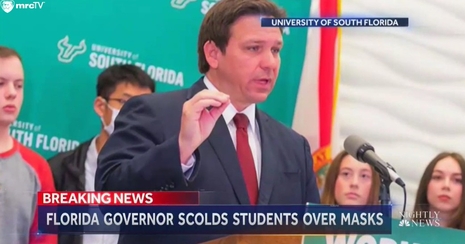 In the annals of TV networks manufacturing scandals, one of the lamest examples was Florida Gov. Ron DeSantis telling high school students at an event of his that “you do not have to wear those masks. I mean, please take them off. Honestly, it’s not doing anything, and we’ve got to stop this COVID theater.”

NBC Nightly News tried to make this a story for not just one night, but two. It’s lame because it came after everyone took off their masks for the State of the Union address, after the “nonpartisan” Centers for Disease Control ruled against mask mandates just a few days before President Biden’s big speech.

It’s also lame because days before, NBC’s own Saturday Night Live aired a skit satirizing urban liberals who worried that maybe they had been wrong about the spread of COVID. One woman said she read an article, and her husband was trying to stop her from talking about it. “It was in Bloomberg, and I thought it was interesting…it was just saying that mask mandates had, I don’t know….little to no effect on COVID.” Then they all made faces of horror for laughs.

This article is real. Faye Flam is a Bloomberg Opinion columnist and host of the podcast Follow the Science. She wrote “Masks have been the most visible part of America’s pandemic response, but one of the least consequential.” And: “There’s no avoiding it: The benefits of universal masking have been difficult to quantify.”

Republicans like DeSantis who have opposed mask mandates – especially for children in schools – have been painted as evil. He’s “DeathSantis,” he’s “the DeSantis variant,” he leads a “death cult.”

But Flam wrote: “The states with mask mandates haven’t fared significantly better than the 35 states that didn’t impose them during the omicron wave. Rhode Island, where I live, has had a mask mandate since mid-December; nonetheless, we saw our January surge rise far higher than any other state. There’s little evidence that mask mandates are the primary reason the pandemic waves eventually fall — though much of the outrage over lifting mandates is based on that assumption.”

But on NBC, anchorman Lester Holt – who adored Andrew Cuomo in 2020 for his COVID response – highlighted “Outrage tonight from that scolding by Florida’s governor to a group of students because they wore masks, calling it political theater.” Holt skipped the point that they were supposed to stand behind him as he spoke, although you could sense that from the video.

Then there was an outraged parent: Dawn Marshall, who is immunocompromised, was furious at DeSantis. “I almost jumped out of my skin. I was really appalled. He took away my authority. He put my child at risk. He put me at risk because my child comes home to me.”

As if DeSantis isn’t vaccinated? Notice how, suddenly, the rights of parents over their children matters, while networks like NBC have been ignoring or decrying those benighted and dangerous parents abusing school boards with their complaints about COVID masking, critical race theory, and LGBT indoctrination.

Parent complaints are good…when they’re against Republicans. NBC’s Miguel Almaguer concluded by tagging DeSantis: “While he won't wear a mask, tonight he is the face of controversy.”