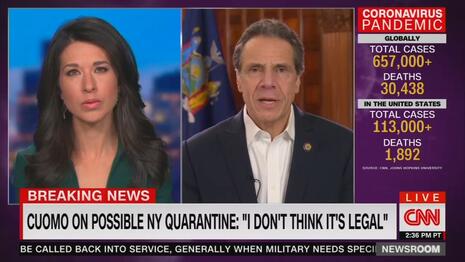 We may suggest it was obvious that CNN was deeply compromised by the way it serially promoted then-Gov. Andrew Cuomo of New York in the early months of the pandemic in 2020, but now The New York Times is reporting it's more corrupt than the first impressions. The front page on Saturday carried the headline "CNN Executive Let Ex-Governor Steer Interviews, Inquiry Finds."

The executive was PR chief Allison Gollust, the one who was having an affair with CNN boss Jeff Zucker. Reporters Michael M. Grynbaum, John Koblin and Emily Steel focused on a late-afternoon March 28, 2020 Newsroom interview with then-weekend anchor Ana Cabrera.

Governor Cuomo had told a senior CNN executive, Allison Gollust, about subjects that he’d like to be asked about on air, according to several people familiar with the matter. Ms. Gollust, CNN’s longtime chief of communications and marketing and a former top aide of the governor, passed along the topics to CNN producers and then reported back to the governor.

On Tuesday, Ms. Gollust was forced to resign from CNN after an internal investigation found a trove of written communications between her and Governor Cuomo, including messages about the March 2020 appearance, the people said....

The episode is the latest example of how closely entwined CNN’s leadership was with one of the country’s most prominent Democratic politicians.

It's common for TV producers to tell guests in advance what the subject or subjects of the interview will be. With a major newsmaker, there may be a deeper discussion over whether the newsmaker has something newsworthy to say. But this was more like CNN taking dictation from Cuomo.

The Cravath investigators also uncovered extensive written communications between Governor Cuomo and Ms. Gollust, who had briefly worked for the governor in late 2012 and early 2013, the people said.

It wasn’t clear what all of those communications were about.

But investigators found messages during the pandemic in which Governor Cuomo informed Ms. Gollust about three specific subjects that he wanted to be covered during a March 28, 2020, appearance at CNN, the people said.

They said those topics included his recent phone conversation with Mr. Trump and the effect of New York’s being placed under lockdown.

Ms. Gollust then sent messages to CNN staff requesting that the governor be asked about those subjects.

The Cravath lawyers reviewed broadcast transcripts that showed that the anchor asked about the subjects that Ms. Gollust had put forward, the people said.

Ms. Heller, the spokeswoman for Ms. Gollust, said that Ms. Gollust “acted as the principal booker for Governor Cuomo during the early days of the pandemic” and that her role was “well known by the entire network.” 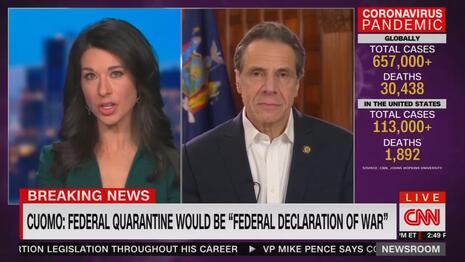 In CNN's "Reliable Sources" newsletter, reporter Oliver Darcy attempts to spin it: "A careful read of the interview transcript at issue shows a probing Q&A and no signs of interference or Cuomo coziness."

Wrong. The questions during this interview, which lasted more than 18 minutes, were set-ups for the Governor, starting with "What's your reaction to what you just heard?"

Click on "Expand" for a sense of how Cuomo received questions that could easily have been just the questions Cuomo requested:

CABRERA: Do you have any problem with the idea of there being travel restrictions? Essentially what I heard from the president is perhaps New Yorkers couldn't leave the state.

CABRERA: What if that is what he wants. What if he wants a lockdown? Would you sue to stop him? You said you don't think it is legal.

CUOMO: Oh, it would drop like a stone. I mean, I don't know if it would operationally have to shut down, but it may as well shut down....

And I know the president is concerned what happened to the stock market, we all are, I am as governor of New York, every person that has a retirement fund, watched the drop is concerned. So why you would want to just create total pandemonium on top of a pandemic I have no idea.

CABRERA: Well, if you think about the actions you took, right, when it came to New Rochelle, you put in a zone that was somewhat restrictive, and you did that in order to stop the spread. If there isn't some kind of lockdown, how do you get it under control? How do you prevent the spread from getting worse?

CUOMO: We had the hottest cluster, if you will, the hottest hot spot in the United States of America, with New Rochelle, Westchester. We did something with the containment zone, closed school and no large gatherings. We never said you can't come and go. We've never confined people's mobility, imprisoned people in a geographic area, even in New Rochelle.

We called it a containment zone which was not the best word. It was to contain the virus, not people. We never contained anyone. I can't remember the last time this country said we're going to contain you in an area. Again, that's why I think I don't even believe it is legal.

CABRERA: I want to ask about the situation in New York. Stories we are hearing from hospital workers are not good. We see lines outside places like Elmhurst. What's the status when it comes to ventilators in New York State? That's been one of the big issues of concern for you.

CUOMO: Well, the ventilators, which, by the way, before this situation, nobody really gave a second thought to ventilators….

As for Gollust acting as Gov. Cuomo's principal booker, Darcy claimed "Brian Stelter and I did not know this." These reporters were in the dark about their own network -- even as they touted its integrity.