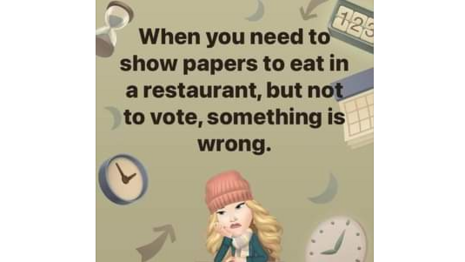 But Bob Daley, an Edgewater, Maryland Facebook user with 427 followers, was flagged by Daniel Funke of USA Today for a meme that read "When you need to show papers to eat in a restaurant, but not to vote, something is wrong."

Fact check: Claim that Americans need 'papers to eat in a restaurant' is missing context

In other words, it's accurate for some cities, but not for America in its entirety, so -- "missing context!"  Funke admitted it's not WRONG, it's ....overly broad.

One example is New York City, which in August became the first city to announce a vaccine mandate. Anyone older than 12 must show proof of full vaccination to dine indoors, hit the gym or go to a movie theater, while children ages 5-11 are required to show proof of one dose. Several other cities, including Boston, Chicago and San Francisco, have similar rules in place.

He seems to be "missing context" in avoiding the "show your ID" part, not just proof of vaccination. He doesn't include DC. But this is like saying it would be "misleading" to say USA Today is a "national" newspaper, where there are many places across America you can't buy a copy. Typically, he found an expert to mock the little meme.

"This is a patently silly claim," Joshua Douglas, a research professor of law at the University of Kentucky, said in an email.

Douglas also spread his snotty quote on his Twitter page:

"This is a patently silly claim," Joshua Douglas, a research professor of law at the University of Kentucky, said in an email. https://t.co/sTJvGKYevL

I sent this message to Funke on Twitter: "I'm a little mystified why you would jump to 'correct' a Facebook post from a guy with 427 followers. That's some 'misinformation' threat?" And: "Why not focus on Mayor Bowser and how she is "missing the context" that asking for an ID sounds like it's not 'racist' when it's about COVID."

Funke does claim this little meme was shared. "The post accumulated more than 3,500 shares within two days." But it certainly looks like a media Goliath picking on a conservative David. On his Facebook page, Daley shared his opinion about this: 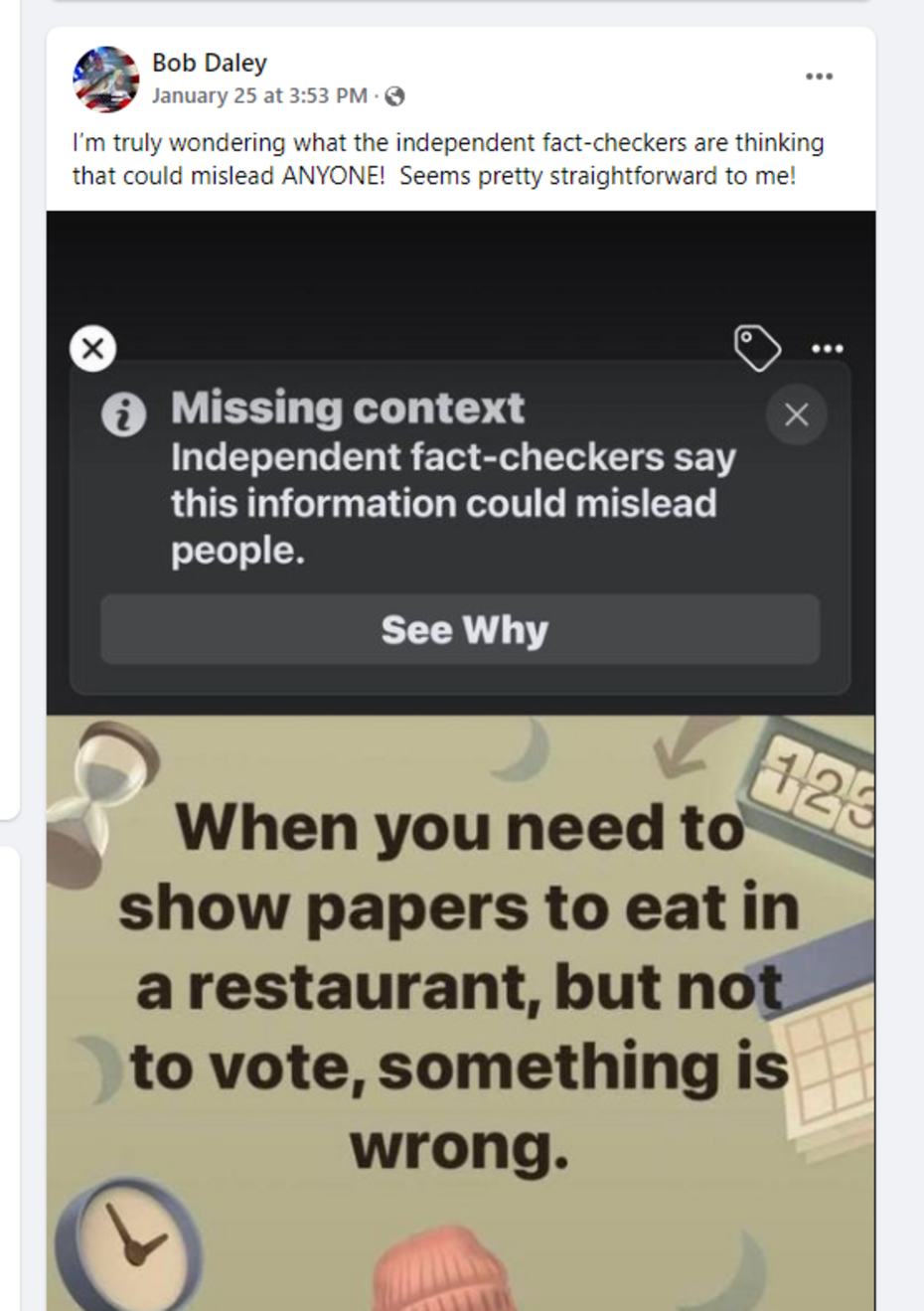 USA Today notes that this harassment of Facebook users is funded by a grant from Facebook. You donate to liberal newspapers, you get liberal spin disguised as "missing context" checking.