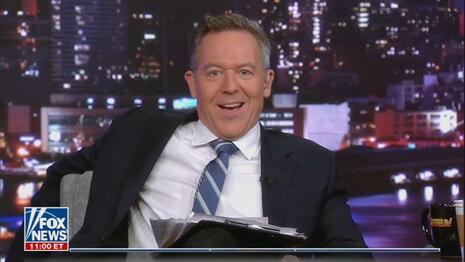 The Washington Post published a profile on Monday headlined “Greg Gutfeld has risen to the top at Fox News — and that’s no joke.” Leftists wish this had never happened. Aaron Rupar tweeted “this piece reads like it was written by Fox News PR. pretty embarrassing.”

Defying predictions, Gutfeld! is regularly generating higher ratings than more established late-night fare, such as Jimmy Kimmel Live! and The Tonight Show starring Jimmy Fallon, and has at times even topped The Late Show with Stephen Colbert.

His combined viewership on the two programs — The Five and Gutfeld! — soared to an average of more than 5 million per day in the fourth quarter of 2021. It’s quite a feat for an edgy former men’s magazine editor who finds himself at a network populated by some of the biggest and most enduring figures in the conservative media pantheon.

Surely, they hated this line: "With each quip and each tick up in the ratings, he's leading an incremental evolution to a slightly looser on-air vibe at Fox News as it celebrates its 20th straight year as the most watched cable news network this month."

But read beyond the ratings, and you'll get a more expected Post approach. Liberal experts appear.

In Gutfeld’s America, President Biden is a doddering geezer. The mainstream media is essentially a house organ for the left. [In reality, they are a house organ for the left.] And the nation isn’t engaged in a necessary national conversation on race, and racial disparities in housing, health care and employment. Instead, he aims to persuade his audience that the nation is consumed by destructive and divisive “reverse racism” and an insidious campaign against Whites.

…What Eric Deggans, NPR’s television critic, sees at play in programs such as Gutfeld! is an effort to undermine the idea that there is systemic racism in this country.

“Some of the ways you push back against that is through humor,” says Deggans, an MSNBC contributor and author of the book, Race Baiter: How the Media Wields Dangerous Words to Divide a Nation. “You try to turn the term ‘woke’ into a joke and a pejorative.”

Therein lies the puzzle that is Greg Gutfeld. Is he merely the fool — or is he something larger? In the theater, “the fool often gets the best line,” he says.

“We’re past the point of pretending there are clean divisions between culture, politics, show business and political theater,” says Matt Sienkiewicz, a Boston College professor who is co-author of a forthcoming book, That’s Not Funny: How the Right-Wing Makes Comedy Work for Them.

Sienkiewicz’s co-author, Colorado State University associate professor Nick Marx, says they hope to issue a “warning” that conservative comedians are already a force in building a broader and younger coalition of true believers and converts, and that liberals ignore them at their peril.

The "peril" of Greg Gutfeld! Then came the anonymous staffer calling him a bully. Does that sound like Fox News PR??

“He’d have hissy fits over almost nothing...verbally eviscerate people,” one former Fox News staffer said, reflecting an atmosphere described by other current and former staffers, who spoke on the condition of anonymity because they weren’t authorized to discuss personnel issues. “Then, in some magical way, the next day he’d say something in such a way or crack a joke so that you’d almost kind of forget it — as would the bull’s eye of all the vitriol he was giving for no reason whatsoever. He’s a bully.” Gutfeld declined to comment.

No, if you want to see Manuel Roig-Franzia gushing over an ideological extremist, you should consider his old profile on "keepers of Fidel Castro's communist message."