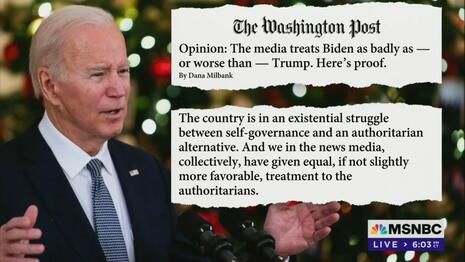 From the Department of I Told You So: Washington Examiner media reporter Becket Adams discovered that Washington Post columnist Dana Milbank's "study" comparing Trump coverage to Biden coverage using a computer turned out to be hot garbage, despite being quoted and celebrated on CNN and MSNBC.

Or as Adams put it, "after some additional digging, most notably by Don’t Walk, Run! Productions, which did the lion’s share of assessing FiscalNote’s data, it turns out Milbank’s theory is even flimsier than initially suspected."

For starters, FiscalNote’s data include a combined 514 Trump-related articles published last year by CBS News and MSNBC. However, the data include exactly zero Biden-related articles published this year by the networks. Either CBS and MSNBC simply forgot to cover the Biden White House, or FiscalNote omitted both networks’ coverage from its research.

How can you compare media coverage of Trump vs. Biden and then exclude Biden-related articles on major outlets? Meanwhile, the sample also included Breitbart, which would lean the Biden coverage in a more negative way than the "objective" folks at CBS and MSNBC.

It's comical how the FiscalNote sample included repeated examples of raw transcripts of Biden's inaugural speech....and each drew a different "sentiment" rating! Love is blind, and so is computerized "media analysis."

The data also contain multiple duplicates. This is in and of itself a problem, as duplicate stories will naturally throw off the weighted averages. But it’s actually worse than that. As it turns out, the “AI” gives different “sentiment” grades to the exact same stories.

Even articles that don't even mention Biden were somehow included in the sample:

Also, a number of articles included in the “Articles Analyzed-Biden” data subset have exactly nothing to do with Joe Biden, including an Associated Press report titled “Lee Hart, wife of 1984 presidential hopeful Gary Hart, dies.”

The name “Joe Biden” doesn’t appear even once in the story. Yet, it ranks at -0.3617 on the “sentiment” scale as a negative against the current president.

Adams also reports some of the Trump articles are actually outside the four-month time period the study is supposed to be monitoring. He concluded: "Put simply, the data are trash. Milbank either is incredibly lazy, illiterate, or a mixture of both."