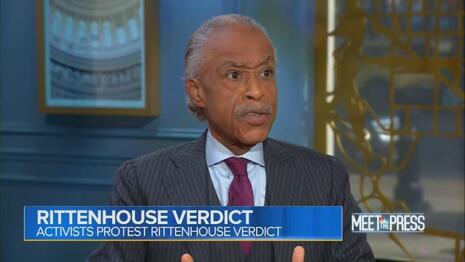 On the Sunday after Kyle Rittenhouse was found not guilty for using his gun in self-defense, the network shows lamented all the alleged racism in the verdict and let liberals lie about Rittenhouse's supposed criminal acts, like bringing an illegal gun across state lines.

Teen vigilantes might even haunt prayer vigils! On Meet the Press, MSNBC host Al Sharpton conjured up the picture of someone showing up with a gun at a prayer vigil to defend something, and shooting somebody. (Like Rittenhouse as Dylann Roof?) On CBS's Face the Nation, NAACP boss Derrick Johnson scored a trifecta of lies about Rittenhouse using an illegal gun that he carried across state lines to defend an automobile dealer that didn't ask for defenders. Wrong, wrong, and wrong.

On ABC's This Week, Byron Pitts dragged out the usual line that a black teenager would never be allowed by the cops to play vigilante in a riot, but ignored (like the rest of the media) a black man in Florida being ruled innocent via self-defense in a shootout with police.

For the most ridiculous take, consider the official Black Lives Matter statement on the Rittenhouse verdict: even the liberal media are white supremacists!

We are not shocked. Today’s not-guilty verdict is expected when white supremacy lives and breathes within our institutions. It is a reminder of how our legal systems are deeply rooted in white supremacy.

It was a set up from the beginning. The police, the judge, the court, mainstream media, and every single system involved all wrapped their arms around Kyle Rittenhouse from the very beginning — from even before the murders he committed.

Enjoy the podcast below, or wherever you put an ear on your podcasts.