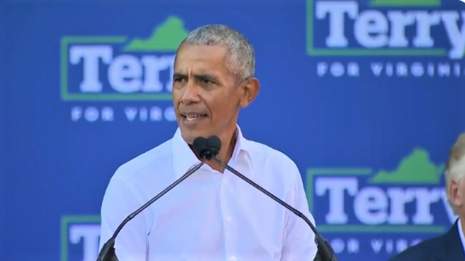 Liberals and their media enablers have a bad habit of complaining conservatives have started "phony trumped-up culture wars." But in reality, the left almost always starts a cultural revolution, and then attacks anyone who resists as a phony. They make it sound like only the right wing fights culture wars or causes them, and apparently ruins American politics with them.

Take Barack Obama on the campaign trail in Virginia with Terry McAuliffe. "We don’t have time to be wasted on these phony trumped-up culture wars, this fake outrage the right-wing media pedals to juice their ratings." Parents and other concerned citizens in Loudoun County are protesting these remarks, as is conservative Twitter. A judge has ruled that a teenaged girl was raped in a high-school bathroom, and Barack Obama said there is fake outrage? The man has two daughters.

In this episode, we also discuss Nick Sandmann's Twitter blast at Brian Stelter, the NewsNation channel covering the real news of a large caravan of immigrants headed to America, and Scott Whitlock's new study of how the networks were so much more aggressive in reporting Trump's low approval ratings in 2017 than their current quick mentions of Biden's low approval ratings in 2021.

Enjoy the podcast below, or wherever you listen intently to your podcasts.