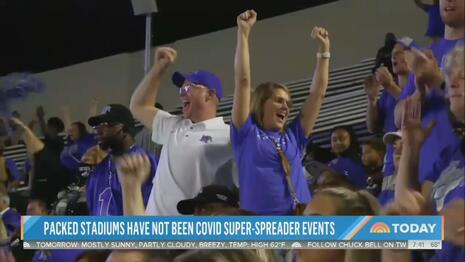 There was a surprisingly positive COVID story on Saturday's Today. NBC reporter Shaquille Brewster said the doctors have found that large crowds in open-air stadiums this fall are NOT super-spreader events.

"For weeks crowds in the tens of thousands, mostly unmasked have sat side by side now cheering on their teams at the halfway point of the season," Brewster reported. "All while doctors warned of games becoming potential super spread events. A frightening prospect at the time with hospitals already on the brink."

NBC even dared to show Joy Reid and Dr. Fauci being wrong with their fears on MSNBC!

JOY REID: As soon as I saw it, I thought COVID is about to have a feast. What did you think?

BREWSTER: But it never happened. Covid cases, hospitalizations, and deaths now all down nationwide.

[To Doctor] Do those scenes of those packed crowds give you less anxiety than they did back in September?

Dr. HIREN POKHARNA: It does. It definitely gives me less anxiety at that time as I see an increased number of vaccinated people. And a decrease, in the dwindling numbers. For sure.

BREWSTER: Cases are now in steep decline in every college football state across the South, including Florida where hospitalizations fell 64% last month. Even as some 90,000 fans packed the Gator Stadium.

Dr. CINDY PRINZ: You see it on TV and it looks really scary because we're not used to seeing that anymore. But in reality I think the exposure isn't as great as we think it is.

BREWSTER: Doctors crediting games in open air venues, a vaccination bump during the surge, and natural immunity after Delta swept through younger populations.

Nick Geddes at Outkick suggested as the NBA and NHL kick into gear, "Be on the lookout for more fearmongering to take place once Fauci and other doctors see the looks of maskless faces across indoor venues."