The “independent fact checkers” – a phrase that in itself strains credulity – leaped to defend President Biden after he received a COVID booster shot in the Old Executive Office Building on September 27. For political rookies, the “OEOB” is not the White House, but sits next to the White House.

Jokers on Facebook showed a photograph of Biden getting his booster vaccination in the South Court Auditorium in front of a set that resembled the Oval Office. One said "Joe Biden using a fake White House backdrop is so on brand for him." Another Facebook post said "They created a fake set for Biden to get his booster shot. The entire Biden presidency is one giant charade." 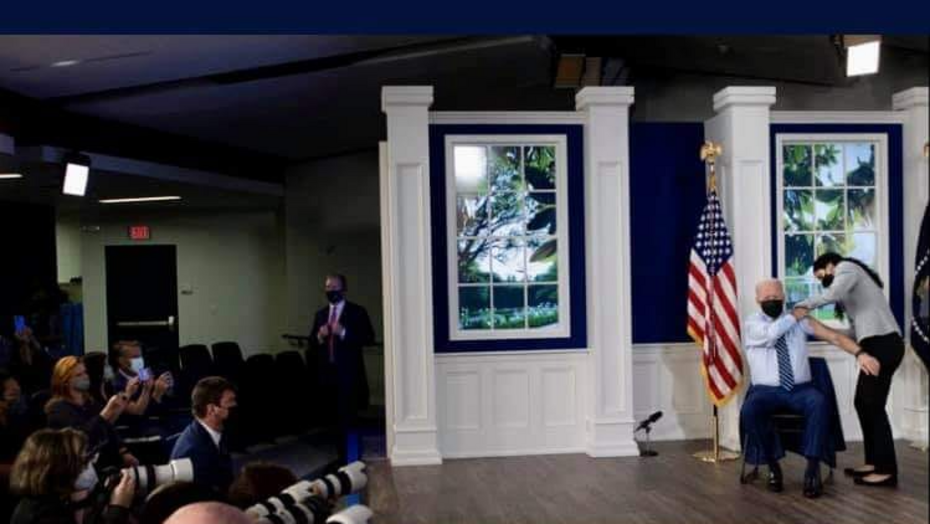 PolitiFact characterized the second post as “False” and announced these posts “were flagged as part of Facebook’s efforts to combat false news and misinformation on its News Feed.” This led Facebook to suppress the Biden mockery. The Facebook post at the page “Real Cloyd Rivers” quoted here as “False” was simply taken down. It can no longer be found.

What was “misinformation”?PolitiFact’s Louis Jacobson set the Biden scene: “Behind him was a backdrop featuring white walls and columns, along with ‘windows’ seemingly looking out toward the White House itself.”

Dear Louis: If you’re putting the word “windows” in quote marks, it can be mocked as a fake set.

Jacobson also tried these lame arguments: “There’s no indication that anyone in the Biden administration tried to pass this off event as being held inside the White House itself.” Claiming great intentions isn’t “fact checking.” It appeared to be like the Oval Office, and it wasn’t.

And: “The backdrop behind Biden as he was getting his booster shot wasn’t ‘created’ for that event —  it had been used five days earlier for a global coronavirus summit.” So if the fake setting is not new, it’s not fake? 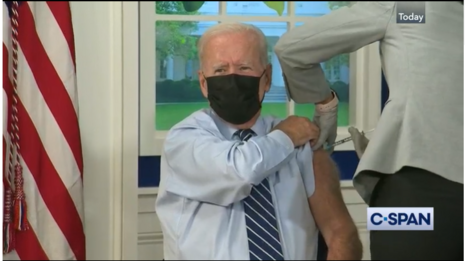 PolitiFact wasn’t alone. The website Lead Stories – heavily used to suppress Facebook content – ran an article, too. It warned of the claim “Joe Biden Took His Booster Shot On A ‘Set’ Of A Fake ‘White House’.” But it was a set, and the set was technically not in the White House.

Former CNN employee Dana Ford was the unpaid Biden helper on this Lead Stories item: “Did the White House set up a fake scene to deceive the public about President Joe Biden's COVID-19 booster shot? No, that's not true.” She had the same lame points as PolitiFact. It was labeled for the press as the OEOB, the fake set had been used for an earlier COVID media event.

Ford added “The article's claims sit comfortably within conspiracy theories around Biden being photo edited into presidential offices and backgrounds as he is not really the president.”

Oh, he’s really the president, and he’s really surrounded by a cyber-Secret Service in the “fact checker” community. You can’t even make fun of Biden without getting suppressed.

The obvious question one might ask: Why not get the booster shot inside the actual Oval Office? Why create a set for “The President Biden Show”? On Fox News, Ari Fleischer suggested they wanted to give Biden a teleprompter inside the camera lens he's looking into, so he doesn't go off script.

If Donald Trump had created a set, there’s no way “fact checkers” would check anyone making fun of him on Facebook. Anti-Trump mockery was the most accurate mockery, no matter how inaccurate it might be.