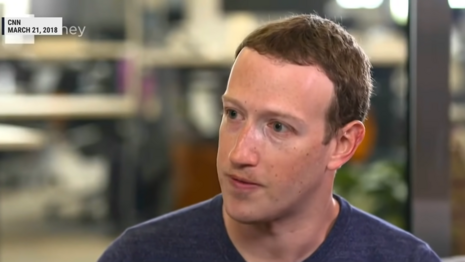 In the last few years, Facebook has become Public Enemy #1 in the media’s imagination, and Mark Zuckerberg is suddenly the creepy James Bond villain. Celebrated PBS filmmaker Ken Burns even ranted on a podcast that Zuckerberg was an “enemy of the state” who should be in jail.

After Facebook went down for six hours on October 4, CBS late-night “comedian” Stephen Colbert joked “Facebook did not say what might be causing the outage. Now, I’m no computer expert, but my theory is: A just God?”

It does not matter one iota that Facebook employees donated 90 percent of their political money to the Democrats in the last cycle. Or that Zuckerberg donated $400 million to a “civic integrity” group that funded election monitors and health measures at the polls in 2020. It doesn’t matter how many Facebook posts they censored to please the Left before the election. The outcomes weren’t favorable enough to the Democrats

Liberal journalists compared the harm of Facebook to smoking, and Zuckerberg to a tobacco CEO. The team at Morning Joe used the CEO analogy after touting a poll that Zuckerberg now is less popular than Donald Trump and Donald Trump Jr.

Colbert joked they’re objecting to quack medical advice – it’s where your “second cousin thinks the vaccine gives your pancreas Wi-Fi.” But they’re really upset that conservatives have used Facebook to go around the media filter. The media want that filter imposed on Facebook. They need to “curate” information as fiercely as the “mainstream media” do.

CNN has gone so fiercely after Facebook in recent days you might think Facebook was somehow like Fox News Channel multiplied by 100. They went live to a hearing on October 5  where Facebook whistleblower Frances Haugen ripped her ex-employer as “one of the most urgent threats to the American people,” that they drive children to suicide, stoke division, and weaken democracy.

The Democrats want a dramatic content crackdown. On MSNBC’s MTP Daily, Rep. David Cicilline trashed Facebook as “a monopoly, it has monopoly power, it’s too big and too powerful to care.” That sounds like a decent description of our federal government, which is much bigger than Facebook. But Cicilline warned Facebook is a business, so “it in fact puts profits before everything else.

On MSNBC’s “MTP Daily,” Rep. Cicilline trashed Facebook as “a monopoly, it has monopoly power, it’s too big and too powerful to care.” It only cares about profit, so “We have to pass legislation that will make Facebook accountable for amplifying toxic and dangerous content." pic.twitter.com/n8EQbVirZc

He insisted not only must the government force more competition into the digital marketplace, “We have to pass legislation that will make Facebook accountable for amplifying toxic and dangerous content.”

So what is “toxic and dangerous”? Let’s start with what “fact checkers” are flagging as false. If you look up the category of “Facebook Posts” on PolitiFact, you quickly find that out of 1,456 posts, 89 percent are “Mostly False” (182 posts) or “False”(765 posts) or “Pants on Fire” (357). Only 65 are “True” or “Mostly True.”  PolitiFact throws the "False" flag, and Facebook suppresses the content.

The most recent posts demonstrate that PolitiFact is especially upset at (a) vaccination misinformation, (b) claims about the 2020 election being stolen, and (c) anyone disparaging Biden and liberals. For example, there’s one for The White House “created a fake set for (President Joe) Biden to get his booster shot.” (It was a set, placed inside an auditorium.) Then, there’s “Canadian Prime Minister Justin Trudeau and wife Sophie faked their COVID-19 vaccinations on live television.”