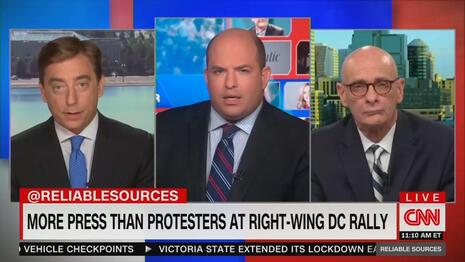 On Sunday, The New York Times reported less than 100 protesters at a "Justice for J6" rally on Saturday that was hyped for days in advance by CNN and MSNBC. This had to be deeply embarrassing for people who describe themselves as the "reality-based press."

The night before, CNN's Brian Stelter admitted it might be a dud, but he was still scolding the conservative media. He lamented "Networks like Fox are barely covering the security precautions leading into the rally. They're almost acting like the rally is not happening at all."

Then on Sunday, Stelter tried to imply that the tiny turnout meant nothing. It was "digital" developments on the far right that really mattered. Both of Stelter's guests warned against all evidence that the pro-Trump, election-denier movement was "metastasizing."

Stelter even suggested the conservatives were "lying" about Russian collusion as the Durham probe issued their first indictment, of Democratic lawyer Michael Sussmann. Stelter complained the charge of false statements was just  "peripheral characters flubbing details." He ignored that many of Robert Mueller's indictments were for false statements under oath.