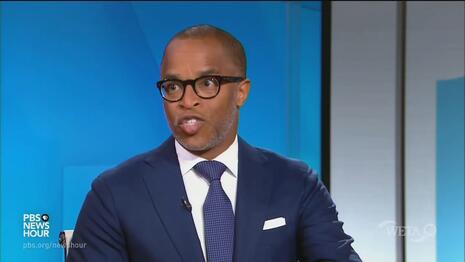 On the night before the 20th anniversary of the 9/11 attacks, the PBS NewsHour pundit team agreed on the proposition that Trump's backers are a bigger terrorist threat than ISIS. Jonathan Capehart proclaimed "I think MAGA and the domestic terror threat is much more worrisome than any foreign threat we could face," and David Brooks nodded in assent.

The liberal elites (including Brooks) love to commingle 9/11 and 1/6, and even sometimes insist 1/6 was worse. They can't imagine beyond the horror of the riot at the Capitol that factually it's not comparable to 3,000 Americans dying with jets being used as weapons. You can look at the people pleading guilty to charges that aren't murder, but for the offense of taking videos for social media inside the Capitol:

Two Illinois men — Bruce Harrison and Douglas Wangler — pleaded guilty to one misdemeanor count of picketing, parading or demonstrating in a capitol building. They spent about 20 minutes inside the Capitol on Jan. 6, during which Harrison took a video of Wangler pumping his fist in the air.

Similarly, Brandon and Stephanie Miller, a married couple from Ohio, also pleaded guilty to the same count of parading in a Capitol building.

The couple entered the Capitol through a window, and then broadcast live on social media from inside.

That's not a violent offense. One man pleaded guilty after texting he wanted to put a bullet in Nancy Pelosi's head. That's at least an actual threat. But they're all "domestic terrorists" in Capehart's telling.

CAPEHART: I think that, in these 20 years, just to add on to what David was just talking about, we have seen a lot of what I think of as one step — one giant step forward, and then two giant steps back. One giant step forward was the election of Barack Obama as president of the United States, first Black president.

And then the ultimate step back, January 6. My colleague Carlos Lozada said this morning on television that how ironic it is that, on September 11, there were reports that the plane that went down in Shanksville was headed to the Capitol, headed to crash into the Capitol. And yet, at almost 20 years later, the Capitol was ransacked by domestic terrorists who lay siege to the U.S. Capitol at a time when the members of — Congress was certifying the last election.

That was, to my mind, the ultimate step back. And to your point about the world turning away from democracy, we have that issue here at home right now.

JOHN YANG, anchor: So, Jonathan, you see it — what I hear you saying is that other forces have changed politics more since 9/11 than 9/11.

CAPEHART: Oh, I think so. I think MAGA and the domestic terror threat is much more worrisome than any foreign threat we could face.

BROOKS (nodding): Yes, I would agree.

PBS NewsHour is sponsored by you, the American taxpayer. You could write your Members of Congress and the PBS Public Editor.

And sponsored by Fidelity and Johnson & Johnson (for a little conflict of interest in your vaccine coverage).