Washington Post religion reporter Michelle Boorstein offered a tart tweet: “A Catholic newsletter promised investigative journalism. Then they outed a priest using Grindr data.” Clearly, they’re implying one is journalism, and one is not. The website is called The Pillar, run by "muckrakers" Ed Condon and J.D. Flynn, and it's too conservative for the Post.

This story was spread across two pages of the Sunday paper. Their liberal bias is plain: they think it’s investigative journalism when you find Catholic priests abusing children, but when you expose top church officials (who take a solemn vow of celibacy) prowling around for gay sex on an app, that’s just a lifestyle choice.

As Boorstein summarized for the so-called “mainstream” press:

Six months later the Pillar broke the kind of story mainstream news organizations would be unlikely to touch: They said they had obtained commercially available data that included location history from the hookup app Grindr, and used it to track a high-ranking priest from his offices and family lake house to gay nightclubs.

This is a bit comical. "Mainstream news organizations" like the Post jumped all over completely unproven rape allegations against Catholic judge Brett Kavanaugh. They never proved one. Then they slimed Amy Coney Barrett as a self-loathing Catholic woman. Conservatives are fair game for all kinds of sleazy "investigative journalism" that assassinates character. 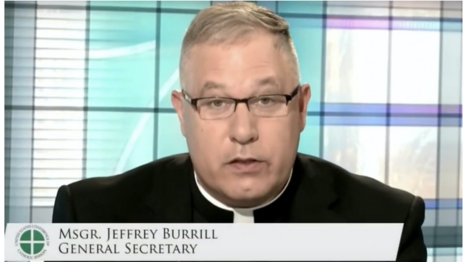 Monsignor Jeffrey Burrill was not just "a priest" -- he was the executive secretary for the U.S. Conference of Catholic Bishops, responsible – among other things – for setting church policy on sex abuse. But the Post called this a “mud fight” among Catholics, where one liberal Catholic described it as “a witch hunt aimed at gay Catholic priests.” It’s not a witch hunt when you find a witch. The media think a celibacy requirement is archaic, so it’s not journalism to call attention to violators

Let's just take Boorstein's accusatory language and turn it back on the liberals.

And in the growing conservative Catholic media scene, their newsletter and its takedown of Monsignor Jeffrey Burrill represents a new power and boldness of those demanding their church be purged of leaders who they see as too permissive on issues like abortion, gender norms and sex outside of heterosexual marriage.

When The Boston Globe under future Washington Post editor Martin Baron went after Catholic sex abuse in Boston, they were working to purge the church leaders they saw as too conservative on issues like abortion, gender norms, and sex outside of heterosexual marriage. There was definitely a political agenda behind the journalism.

At the Catholic News Agency, the pair [Condon and Flynn] quickly stood out for being the rare right-leaning Catholic journalists aimed squarely at the hierarchy and holding it accountable. Both regularly sprinkle their tweets with references to church law and confidently — some say cockily — tout their own interpretations as the most pure and accurate.

As if Washington Post journalists don't cockily tweet their own interpretations of politics as the most pure and accurate? Come on! And the Marty Baron-boosters don't like "holding the hierarchy accountable"? Not when they might be friendly insider sources, apparently.

Finally, Boorstein noted Condon and Flynn "say their journalism is in the service of Jesus Christ. Some Catholics agree; others, even fellow conservative Catholic journalists, worry the pair also see themselves as a kind of prophet, judge, jury and executioner."

Can we go back to Kavanaugh and Barrett? Or Clarence Thomas? Or anyone else the Post wanted to cancel?

Flashback, 2012: On the front page, Michelle Boorstein went after a priest...who denied communion to a lesbian who self-identified as a Buddhist.