Column: The News Media vs. The Flag-Waving Weirdos?

Independence Day is supposed to be a day of national unity. President Biden proclaimed “The Fourth of July is a sacred day in our country. A day of history, of hope, remembrance and resolve, of promise and possibilities.” Liberal Biden voters in the media did not concur.

These are the people who refuse to wear flag pins or say the Pledge of Allegiance at news events they cover. They love their own freedom, but they use it to be professionally unpatriotic. Oh, they would claim that people who love their country can be the most passionate critics, fighting for the still-unfulfilled promise of liberty and justice for all. But that’s not what they do.

They besmirch America as a systemically racist nightmare, and anyone who disagrees is a bad person. Take issue with their hot takes, and you are the “divisive” one starting a “culture war.” 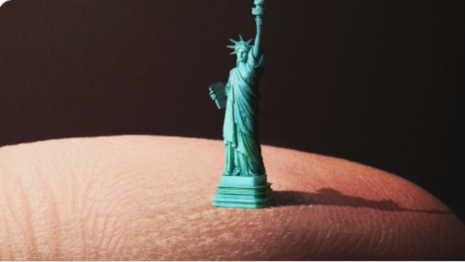 On July 4, The Washington Post ran a big piece in their Arts & Style section by art critic Philip Kennicott on how the Statue of Liberty is a shabby symbol. The Post illustrated it with an image of Lady Liberty posted on a fingertip, a tiny embarrassment.

To Kennicott, it's a sad reflection of hypocrisy for blacks, women, gays – pretty much everyone except cisgender straight white men. “This is your symbol, not mine,” he reported saying to himself out loud. He added he was “repeating if not the exact words at least sentiments similar to those others had no doubt felt since the beginning of the republic."

The New York Times ran a front-page story by reporter Sarah Maslin Nir on how liberals think flag-wavers must be disreputable right-wingers. She began with a liberal farmer on Long Island who posts a large flag on his rusting pickup as he sells his farm goods. He realized it could be hurting his business when he sounded a liberal note to a customer, who expressed great relief: “I thought you were some flag-waving something-or-other.”

Waving the flag is inherently suspicious, a sign of craziness. Or, as the Times tweeted, “Today, flying the flag from the back of a pickup truck or over a lawn is increasingly seen as a clue, albeit an imperfect one, to a person’s political affiliation in a deeply divided nation.”

And who’s doing the dividing?

So-called National Public Radio tweeted out a thread of the original Declaration of Independence, blasting it as "a document with flaws and deeply ingrained hypocrisies." It says “‘that all men are created equal’ — but women, enslaved people, Indigenous people and many others were not held as equal at the time.”

See? You can’t see the text as a statement of idealism, a promise to be fulfilled in time. The Declaration is painted as a lie perpetuated by malignant, propertied white men...with your taxpayer dollars.

Then there was National Geographic, who offered this gem of a kill-joy article: “The hidden toll of July Fourth fireworks: Using crowdsourced data from home air quality monitors, scientists found that vulnerable people and communities of color are disproportionately exposed to air pollution from firework celebrations.” This is not a Babylon Bee parody.

Flag-waving, or singing the national anthem, or fireworks displays could be unifying. But our media aren’t interested in national unity.

They seem more interested in shaping America in their own revolutionary image. They sound like their knees jerk dramatically at anything that makes patriotic Americans happy and proud. That good feeling can’t possibly be indulged, even for one day. It has to be scolded and “corrected.” Then they wonder why the “news” business is sinking.