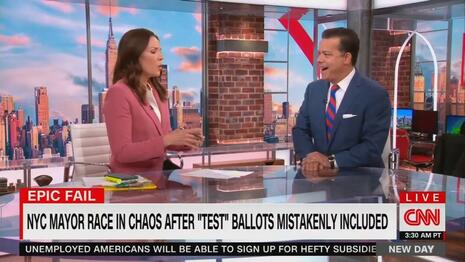 Somehow, ABC, CBS, and NBC are collectively bored by the vote-counting failures in New York City, where they mistakenly included 135,000 test ballots in their vote counting.  On Thursday morning, CNN analyst John Avlon called the Board of Elections corrupt and incompetent. "This thing needs to be ripped up and reformed and turned into a nonpartisan, professional organization." The Big Three don't care much.

We also take a spin around the saccharine carousel of Jill Biden's cover story in Vogue magazine. ABC could get excited about that subject.

Enjoy the podcast below or wherever you enjoy your podcasts.