If there's a phrase about journalism that should bowl people over with laughter in 2021, it's the phrase "industry-wide standards of impartiality." But there was Washington Post media reporter Jeremy Barr sounding like Rip Van Winkle in a gushy article on Wednesday about the "new CNN," suddenly liberated from its stodgy objectivity. The headline was "The new CNN is more opinionated and emotional. Can it still be ‘the most trusted name in news’?"

Welcome to the new CNN, where journalists and anchors, traditionally restricted by industry-wide standards of impartiality, have been given the green light under network president Jeff Zucker to say what they actually want to say — even if it strikes some as opinionated.

“One of the things that I’ve tried to encourage is authenticity and being real,” [CNN boss Jeff] Zucker said. “If we pretend not to be human, it’s not real.” 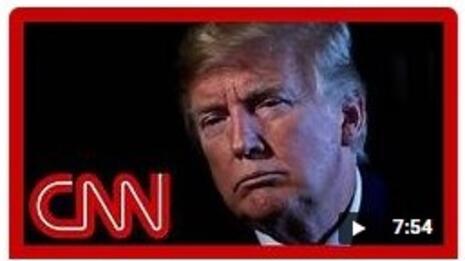 Then Barr repeated: "Yet to some ears, and during some stories, CNN’s new emotional rawness can sound like bias at a network that built its reputation on studiously neutral impartiality." Some of us would say CNN demonstrated a dramatic tilt in 1992, helping Bill Clinton get elected, "fact checking" the Bush-Quayle campaign more, letting George Stephanopoulos debate President Bush in a surprise call to Larry King Live.

But Barr pretends impartiality just lapsed: "But while some viewers may miss the old strait-laced, just-the-facts CNN, the new strategy seems to be working: In 2020, an extremely newsy year, it attracted its largest audience in its 40-year history."

Barr also touted that Chris Cuomo had the highest ratings in the first quarter -- in the 25 to 54 demo. Among all viewers, he wasn't in the top five. Just having a Cuomo as a host made a mockery of "studiously neutral impartiality," and that happened eight years ago.

Even Barr had to note that CNN dove into "emotional rawness" because of Donald Trump. They didn't say CNN was liberal, but it was suddenly pleasing the left: "Many critics believed Zucker’s CNN, in hopes of hooking viewers, had lavished excessive airtime to Zucker’s reality TV superstar as he launched his unlikely 2016 campaign. Zucker later apologized for that, though not for his other controversial practice of hiring staunchly pro-Trump pundits to tangle on-air with CNN’s political analysts. From that standpoint, many critics on the left see CNN’s shift to a more opinionated journalism as a corrective."

It was never a good idea to hire pro-Trump contributors who were expected to defend absolutely everything he said or did, turning them into a clone of Trump, denying their opinions had any authentic basis other that either adoration or cynicism.

The shock here may that Barr boasted he's worked on this article about CNN's "evolution" for two months:

I spent about two months tracing the evolution of CNN over the last two decades, talking with anchors from different eras and finally speaking with network president Jeff Zucker about encouraging his on-air personalities to be more “real” and “human.” https://t.co/TOHPt5bIgc

"Real" and "human" are positive words for "biased" and "liberal." Objectivity, by contrast, is apparently unreal and less than human.