PolitiFact Asks Us to Back Up Our Chart; When We Did, Nothing Happened

PolitiFact is well known for hammering conservatives far harder than liberals. We have offered a series of snapshots of their pro-Democrat tilt. What happens when they attempt to flag a conservative group for falsehood...and then walk away? Let us speak from some of our own recent experience.

On April 8, longtime PolitiFact writer Tom Kertscher contacted the MRC through our FreshDesk account asking about a chart we posted on Facebook about the border surge under Biden. Kertscher wanted an answer within 14 hours (including while the MRC slept). MRC Chief Marketing Officer Ed Molchany replied the next morning shortly after 9:

Can I get a reply by noon ET on Friday for a PolitiFact fact-check article I'm doing on this MRC Facebook post?

I know the post attributes the figures to CBP.gov.

Can you send links to the CBP data that were used to arrive at the figures?

Then Molchany noticed that the chart needed an update, because it was an estimate. The Facebook page was updated.

We updated the image with final March numbers from CBP which were released yesterday. The original used an estimate of 171,000 reported by the Washington Post, but the actual number turned out to be slightly higher at 172,331. The new image is here:  https://www.facebook.com/mediaresearchcenter/photos/10158553869303717

Here's the updated chart (complete with Biden's untruthful statement from his first press conference on March 25): 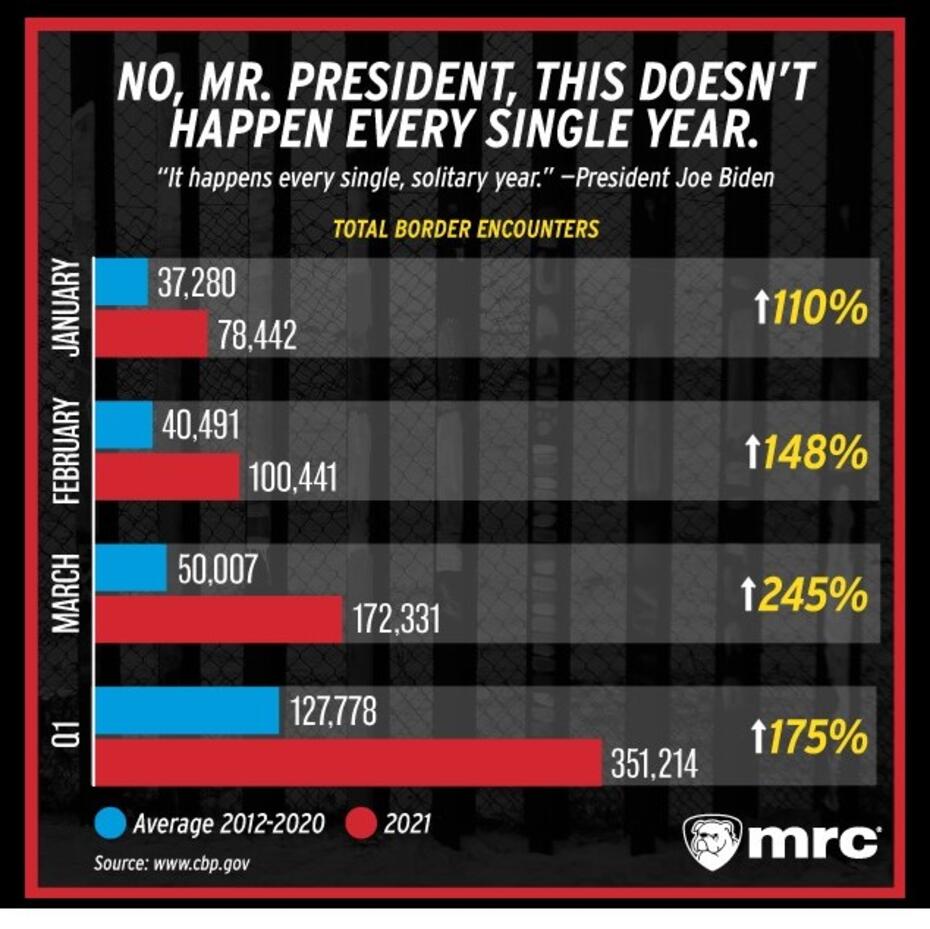 Thanks, Ed; I had noticed that the CBP figures for 2021 were slightly higher than what MRC's original post said.

Molchany then said yes, and sent his Excel sheet with his math:

I do. Here's the spreadsheet we used. Let me know if you have any questions. If you agree with this, we'd love to to get a positive fact-check from you guys!

Here's the spreadsheet he sent: 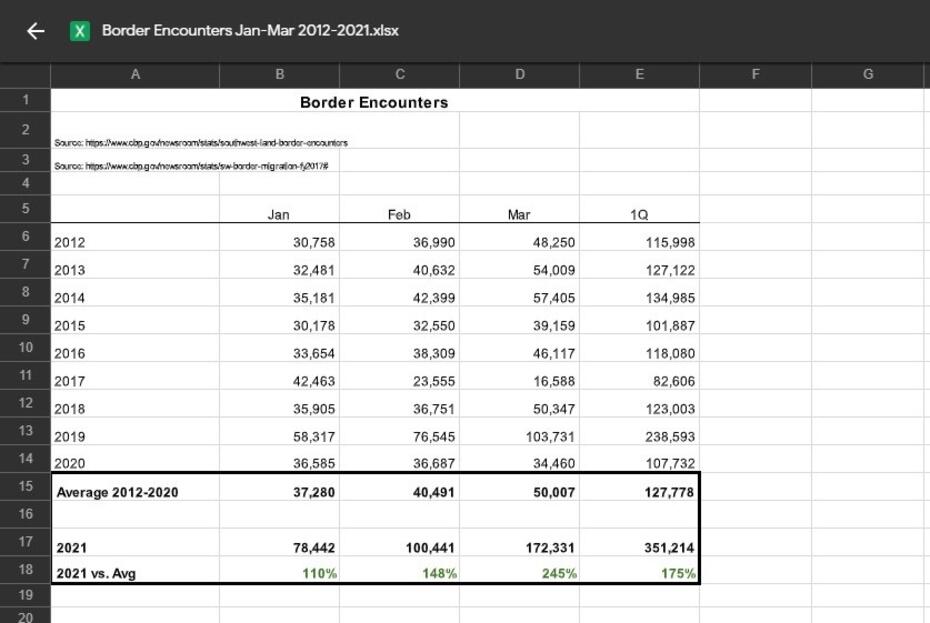 So what happened? Nothing! Kertscher and PolitiFact never posted a ruling that the MRC chart was acceptably truthful. It might have helped PolitiFact  to show good faith after this exchange of facts. I contacted Kertscher for comment, and Kertscher said he forwarded to PolitiFact editor Angie Drobnic Holan. There has been no comment sent back.

Instead of ruling on our chart, on Monday, Kertscher posted a "fact check" that warned about a Facebook claim that the Bidens wanted to remove gender terms.

But this meme is what Kertscher felt needed a serious "fact check," a lame joke that almost no one will mistake for a news item. 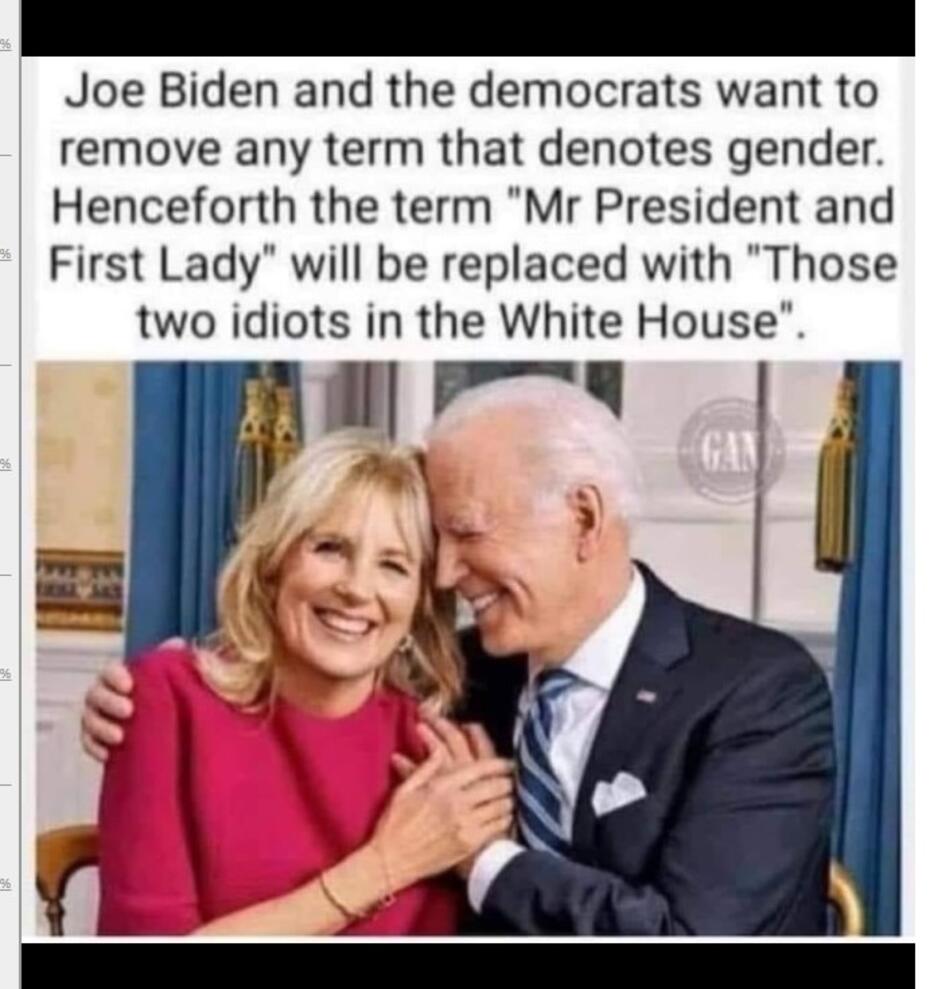 So when you see that the Democrats get the most True and Mostly True ratings on PolitiFact, it might just be because they won't give them to conservatives when their facts add up.