In a Splashy Front-Pager, WashPost Slimes Tucker Carlson as 'The Bully Pundit' 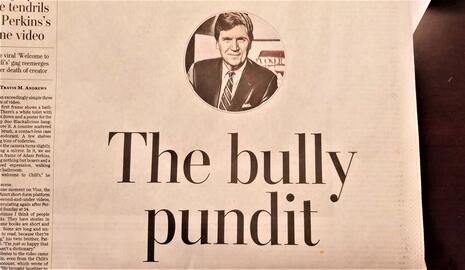 Radio host Chris Plante made fun on his Friday morning radio show with the obvious point: So it’s dangerous to launch attacks on journalists, but what is this story but a 43-paragraph attack on a journalist? Apparently, no Fox News host can be identified as a journalist. The Washington Post implies conservatives are propagandists, not journalists.

This is just the latest in a pile of stories campaigning for Carlson to be canceled by Fox.

This was how the story was headlined on the internet:

Tucker Carlson villainizes journalists on his top-rated show. Then the threats pour in.

As the Fox host’s popularity grows, he has found fodder in lesser-known media figures whom he presents as symbols of liberalism-run-amok

Underneath the copy on the front page, the Post put these words in bold type:

Fox News host Tucker Carlson has established a pattern of lambasting journalists with far lower profiles than him. The cable network has defended Carlson, saying in one case that ‘no public figure or journalist is immune from legitimate criticism of their reporting, claims, or journalistic tactics.’

This is a common liberal-media tactic: disparaging conservative media criticism by saying it only encouraged violent Twitter trolls. CNN commonly claimed any attempt to criticize them or chant “CNN sucks” at Trump rallies encouraged violence against journalists.

Barr briefly mentioned leftists threatening Carlson, or what "he considers" a threat.

Carlson’s allies, though, have countered such complaints by noting that the host, too, has been the subject of behavior he considers harassing, such as a boisterous protest outside his Washington home in November 2018 that he found threatening.

So getting a Twitter death threat is serious, but a mob outside your home is just a "boisterous protest"? Was it "mostly peaceful"? His wife called the cops. The vast majority of the story sticks to Tucker the Bully Pundit argument. Leftist White House reporter April Ryan pops in toward the end.

“I am just a target that he wants to use to gin up his base and the base of Donald Trump in 2024,” she said. “I’ve never targeted Tucker Carlson. I’ve never targeted him. I never said, ‘Oh, go after this person.’ They make personal attacks because they can’t handle the truth."

Ryan said she confronted Carlson at the Politicon convention, where both spoke, a few years ago. She said she told him that “basically everything you do has put my life in jeopardy.”

The point of this article is that Fox News is a menacing threat, not a news network. It's as anti-Fox as a Brian Stelter rant at CNN. This makes sense, since Barr is a favorite of Stelter's.