Four years ago, CNN anchor Wolf Blitzer served as an unofficial publicist for the NAACP as they staged a sit-in protest at the Senate offices of Jeff Sessions in Mobile, Alabama. He let then-NAACP boss Cornell Brooks speak in long paragraphs and compare their protest to the civil rights protests in Selma against the segregationists.

On Monday, Blitzer was at it again, teeing up leftist talking points from the NAACP boss Derrick Johnson, only this time they were protesting anyone that would object to Biden’s nominees. Showing pictures of  Xavier Becerra, Deb Haaland, Neera Tanden, and sub-cabinet nominees Vanita Gupta and Kristen Clarke, Blitzer threw a softball suggesting Republican critics were racists opposed to “historic strides” in cabinet diversity:

WOLF BLITZER:  Let me get your thoughts on another sensitive issue. A handful of Biden cabinet nominees are facing intense criticism from Republicans in the Senate. These nominees are all people of color. Some are civil rights leaders. Biden's made some historic strides in terms of cabinet diversity, but are these nominees, from your perspective, being held to a different standard? And we've put five of them up on the screen right now.

DERRICK JOHNSON: Absolutely. We have a dual track. There should be no dual track. Judge Garland was voted out of Senate judiciary 15-7, bipartisan. That's the same standard that all of our nominees should be confronted with: An opportunity to show, are they fit to serve? Do they respect and uphold the Constitution? Kristen Clarke, Vanita Gupta are well-qualified. They should be moved through the process in the same manner of which Judge Garland has been moved through the process. There should not be a dual standard.

CNN and the other networks have often avoided any focus on the extreme views of Biden appointees, hailing them instead for their skin color or sexual orientation. Kristen Clarke has been questioned for writing in a letter that "Black infants sit, stand, crawl and walk sooner than whites...Melanin endows Blacks with greater mental, physical and spiritual abilities." Blitzer failed to throw that at Johnson.

Blitzer then acknowledged Republicans have called some Biden appointees radical and dangerous....and then again suggested this was just racist tactics: 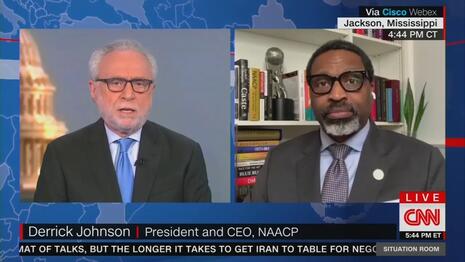 BLITZER: Yes, Merrick Garland the -- was confirmed by the Senate Judiciary Committee, it will now go before the full Senate. He's expected to be pretty overwhelmingly confirmed when all is said and done. Some of the nominees have been painted by their critics as radical, it's crazy, even dangerous. How much weight do those words carry when they're used specifically against people of color?

JOHNSON: It's fear-mongering. We've seen, unfortunately, the Republican Party using fear to try -- to throw out progress. We must move on as a nation. We should be in the midst of battles of ideals, not using the tool of fear, tool of race and division to define one's political party.

Oh yeah, the NAACP never divides people by race! CNN is equally shameless -- they CNN spent the Trump years suggesting most of what they were doing was "radical, crazy, even dangerous." But saying that now about "progressives" is somehow automatically discriminatory.