Former NBC Today star and CBS Evening News anchor Katie Couric toed her usual partisan Democrat line in an appearance on HBO's Real Time with Bill Maher. Most notably, she insist Mitt Romney "seems like Nelson Mandela at this point." Joe Biden said Romney wanted to put "y'all back in chains" back in 2012, but now he's a secular saint.

Mitt Romney “seems like Nelson Mandela at this point” – @KatieCouric on #RealTime pic.twitter.com/820mAriLy0

Maher, who had suggested Romney will run for president next time, gently mocked the comparison, noting Mandela's long imprisonment: "I think he suffered less, but yes."

"You know what I mean," Couric replied. "He seems to be an incredible statesman now because he's spoken out against [Trump]."

Liberal author Matt Jones disagreed. "He does to liberals," like Couric. "But to conservatives, he's a traitor. He'll never be the nominee."

There was more, as Joe Wulfsohn of Fox recounted: 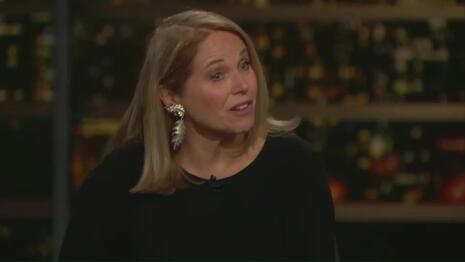 On the subject of whether Senate Majority Leader Mitch McConnell, R-Ky., will vote to impeach President Trump, Couric fantasized about the "Hollywood ending" it would be if McConnell "comes out as the hero" to convict the president.

Moments later, Couric calmed Maher's nerves after he predicted Trump would run for president again by pointing to "some legal scholars" who say that while the Senate needs 67 votes to convict Trump in the Senate, it takes only a simple majority to bar him from seeking the White House again.

Maher suggested Biden should scrap a formal inauguration for his own safety: "Joe Biden -- he's a friggin' tragedy magnet. He broke his foot playing with his dog. I mean, his eye exploded from blinking. We have got to treat this guy like the baby in Children of Men." Couric wouldn't have it: "I think he's pretty vibrant and in good shape. You saw him run across the stage when he made that speech.... I mean, compare his physical fitness to Donald Trump, hello!"

Update: Adding this clip about "deprogramming."

Katie Couric: "How are we going to really, almost deprogram these people who have signed up for the cult of Trump?" pic.twitter.com/MW5LWN3dOk