London's Daily Mail reported ABC News bungled in its pro-Biden bias over the weekend, claiming they were celebrating Biden's apparent victory with fireworks:

"Fireworks lit up the night sky over London, England, after Joe Biden was characterized to be the apparent winner of the presidential election," the supposedly worldly network wrote on social media in a since-deleted Tweet. 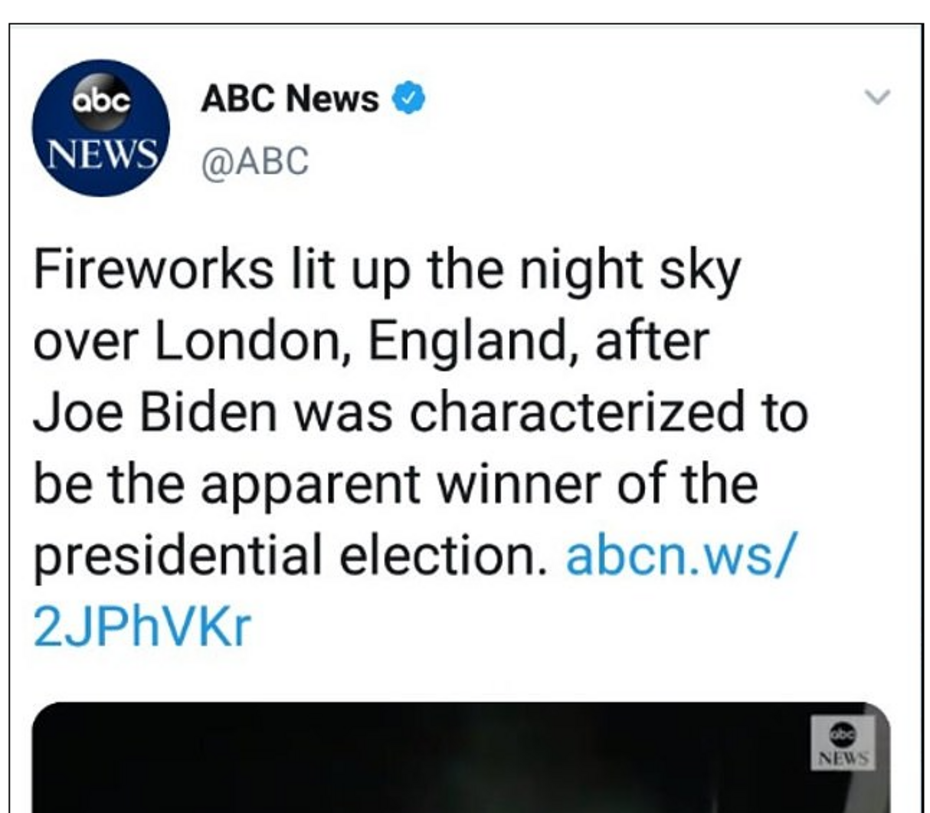 ABC wasn't alone. On Saturday night, CNN reporter Jeff Zeleny was enchanted as well: "We heard church bells in Paris, fireworks in London. This is indeed a moment the world is watching!"

It also happened with Ari Melber on MSNBC late on Sunday night, showing video of church bells in Paris, and then: "That doesn't happen for every election. That was the reaction there to mark Trump losing. Joe Biden becoming our President-Elect. Take London. Fireworks were set off, celebrating this historic win. Let's take this in." After a clip of fireworks, Melber added: "Millions of people in dozens and dozens of countries stopping to reflect on what we did, what you did here in America yesterday."

The networks are ushering in a new era of respect for....truth and facts??

As the Daily Mail reported on ABC:

Brits were quick to correct the broadcaster on their mistake, and pointed out that the fireworks were part of the annual Bonfire Night celebrations.

One social media user reacted with glee, saying: 'Shall we tell them? I wanna tell them!' while another branded the TV network 'morons'.

The glee came from Daniel Hannan, a former Conservative member of Parliament:

The paper explained "Every year on Bonfire Night families across the UK gather outside on November 5 to enjoy firework displays commemorating the failed Gunpowder Plot of 1605. The plot was formed by Catholic zealots to blow up Parliament in order to assassinate King James I and overthrow Protestant rule." It's delayed when November 5 is in mid-week, and was muted this year in the midst of a new coronavirus lockdown.

Hannan also tweeted "Fun fact: #BonfireNight was widely celebrated in the 13 colonies, and was an especially big deal in Massachusetts. George Washington ordered people to stop marking it because he hoped to win Canada, with its sizeable Catholic population, to the revolution."

UPDATE: Our friend Derek Hunter, author and podcast host, noted the church bells in Paris for Biden was also inaccurate! Kudos to AP Fact Check, which reported that NBC's comedians also got in on the inaccuracy:

Americans seized on the false claim as well. A Facebook post with the claim from the popular Facebook page Occupy Democrats was shared more than 10,000 times. Saturday Night Live 'Weekend Update' host Colin Jost joked, “Do you know how bad you have to be for Paris to ring church bells when you lose?”

However, both the Paris Diocese and the Diocese of Nanterre, a Paris suburb, confirmed to the AP that their churches did not ring their bells for Biden. Instead, any church bells heard in the greater Paris area on Saturday evening were likely calls to prayer.

Thanks @derekahunter -- AP finds TV reports of Paris church bells ringing for Biden is also FALSE. But Colin Jost on SNL joined in the fakery: "Oh my God, that's real! You know how bad you have to be for Paris to ring church bells when you lose?" https://t.co/VckvqpLilY pic.twitter.com/wvUtH68QwX