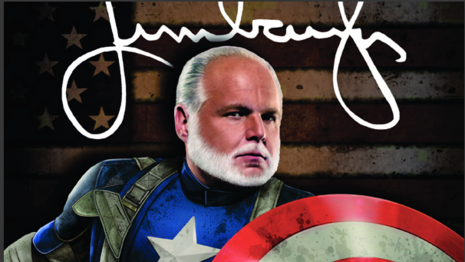 It's always fascinating when Rush Limbaugh is more enthusiastically spreading a report from The New York Times more than the liberal media. In his first hour on Tuesday, Rush read from Ryan Saavedra at the Daily Wire that Times pandemic reporter Donald McNeil Jr. confessed an outbreak of optimism on the coronavirus forecast.

The headline was "A Dose of Optimism, as the Pandemic Rages On." We'll take any silver lining in this dark cloud. The "medical cavalry is coming."

The federal vaccine effort drew this surprising sentence on page D5 of the Science Times section:

Despite the chaos in day-to-day politics and the fighting over issues like masks and lockdowns, Operation Warp Speed — the government’s agreement to subsidize vaccine companies’ clinical trials and manufacturing costs — appears to have been working with remarkable efficiency.

He cited that Moncef Slaoui, Operation Warp Speed’s chief scientific adviser and a former pharmaceutical executive who has overseen the development of 14 vaccines, has "said repeatedly that he expects some of the candidates that he picked to have 75 to 90 percent efficacy and at least two to win approval by early January."

Since January, when I began covering the pandemic, I have been a consistently gloomy Cassandra, reporting on the catastrophe that experts saw coming: that the virus would go pandemic, that Americans were likely to die in large numbers, the national lockdown would last well beyond Easter and even past summer. No miracle cure was on the horizon; the record for developing a vaccine was four years.

Events have moved faster than I thought possible. I have become cautiously optimistic. Experts are saying, with genuine confidence, that the pandemic in the United States will be over far sooner than they expected, possibly by the middle of next year.

A search of closed captioning today showed "Operation Warp Speed" was being discussed on Fox, but not so much elsewhere. Dr. Leana Wen, the former Planned Parenthood leader, briefly said on CNN's Cuomo Prime Time on Tuesday night "Let's give the Trump administration credit for Operation Warp Speed, although there have been problems about politicizing that process."