"Sources familiar with Tapper’s actions" say that Jake Tapper engaged in some sly backstage political activism, trying to convince his Republican friend Sean Parnell to run in a different congressional district in Pennsylvania than the 17th, where freshman Democrat Conor Lamb is running. Tapper's denial came indirectly with one word on Sunday, from a tweet by Trump adviser Richard Grenell. 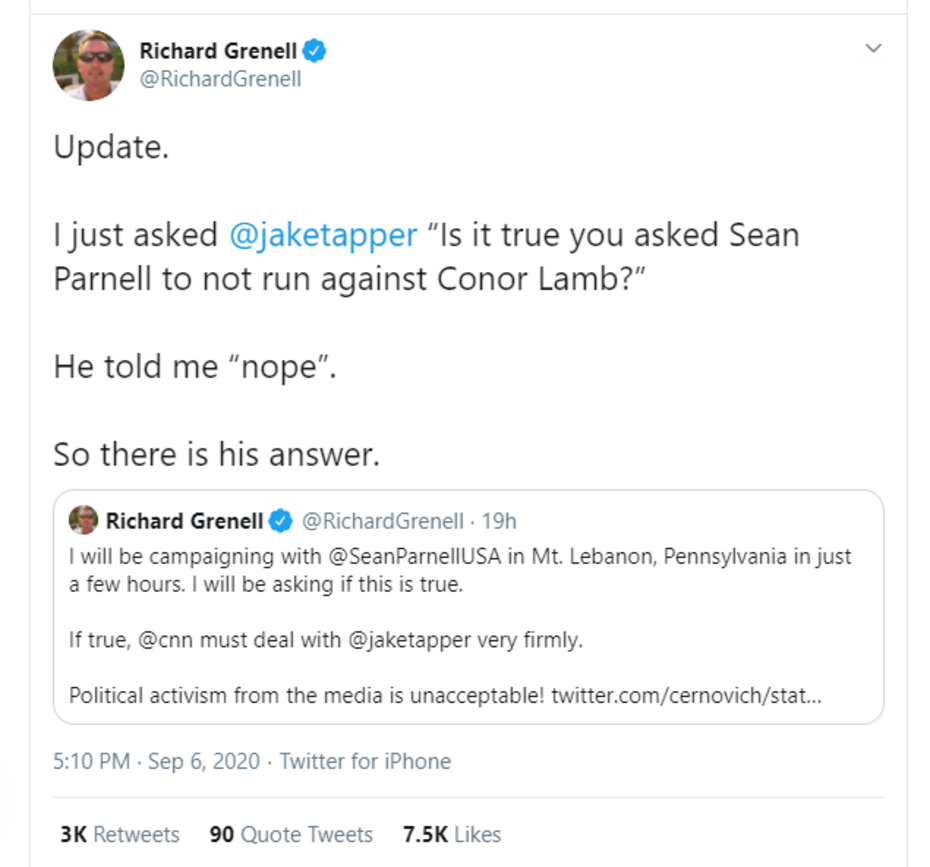 Boyle is so aggressive with his anonymous sources that he used them in places that seem unnecessary.

“Tapper is a former Democrat staffer in PA,” the senior national GOP campaign staffer said. “He is a former staffer for the Brady Campaign for Gun Control. Now he is a reporter at CNN who is supposedly unbiased, but he’s still a Democrat operative at heart."

As Breitbart noted, Tapper boasts of being a Philadelphia native, and in 1992, soon after he graduated from Dartmouth, Tapper was part of the campaign that "helped put family friend and now-former representative Marjorie Margolies-Mezvinsky (D-Pa.) in office." He was then her congressional press secretary until she lost after one term in 1994. (She used to be a reporter for NBC affiliate WRC-TV in Washington.)

Then there's an anonymous veteran's advocate on the attack: 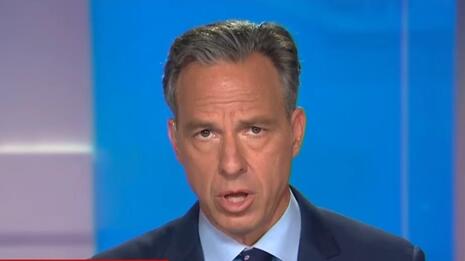 “Jake pretends to be a friend of all veterans,” an adviser to one such veterans group that Tapper has promoted told Breitbart News. “That’s a colossal lie. Jake is a friend of Democrat veterans and only those GOP vets that do as he tells him to do.”

If this infuriates Tapper -- and we can guess it does -- then CNN should think this through when they leap on anonymous sources saying things about Republicans that they feel unfairly slimes them. There's a reason people call this kind of journalism "fake news." It's not transparent at all, it hides all kinds of nasty motives.

Parnell served as a U.S. Army Ranger Captain in the so-called “Outlaw Platoon” for 485 days on the Afghan-Pakistan border. Tapper certainly knows him. In 2018, Tapper hosted a book event promoting Parnell at the National Press Club. Tapper tweeted Parnell's decision to run against Lamb in 2019.

Conor Lamb was aggressively sold as a "moderate." Get a load of conservative CNN analyst David Urban on Tapper's show on Election Day 2018: "Look, the Democrats have done a phenomenal job. You look at Ralph Northam in Virginia, Conor Lamb, Amy McGrath, these folks could be Republicans. They served in the military, conservative values."

The day after the election, Tapper stayed on that theme:  "in 2006, when Democrats regained the House the last time, there were a whole bunch of moderate Democrats. What Nancy Pelosi called her majority makers. These were the people from swing districts, who were less liberal, the Conor Lambs of the caucus, as it were, who were less liberal, maybe even less supportive of her personally. She is going to have to balance those majority makers with the needs of the Democrats running for president, as you point out, where they are running to the left..."

That's not what it looks like now. The American Conservative Union gave Lamb a 7 percent conservative score -- 7, not 37, like a "moderate" might have. No one should say "could be Republican."