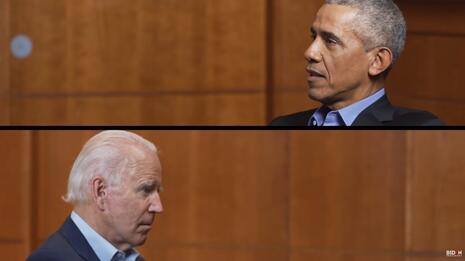 The campaign video released by Joe Biden on Thursday, featuring his 15-minute conversation with former president Barack Obama, opens with the urgency of self-appointed superheroes joining forces to save the world. With its sleek production values and swift, assured editing, the video’s initial shots — of the two men disembarking from black SUVs, then walking purposefully down a featureless hallway — also manages to evoke the stylish, we-got-this cool of an Ocean’s Eleven sequel. (You know, the one where George Clooney and the guys rip off a bland Washington think tank while wearing strangely sexy-looking masks.)

This was NOT an action movie. It was talk, talk, talk, about the great old days of Obama-Biden.

Hornaday explained his ad was "adroitly directed" by Adam Garber, who worked in Obama's Office of Digital Strategy. "In taste and tone, Garber’s film is of an entirely different genre than those made by President Trump’s campaign, most recently seen in a commercial falsely claiming that Biden supports defunding the police — a lurid anarchic fantasy reminiscent of Stephen K. Bannon’s dystopian oeuvre."

The videos were also "far more measured and mainstream" than the "Republican political action committee the Lincoln Project, whose cleverly scrappy videos look like guerrilla indies by comparison."

But this is just a long, dry campaign advertisement. Only Democrats would find it entertaining....which tells you a lot about The Washington Post.

Just like your garden-variety DNC Debbie, Hornaday made a virtue out of Obama and Biden talking to each other from about 10 feet apart.

Today, we understand that negative space isn’t an aesthetic glitch but a necessity. And it can offer its own compositional beauty, exemplified in a skillfully edited sequence in which Obama and Biden face each other in horizontal Zoom-like shots, the 21st century version of the perfectly balanced Golden Ratio.

As a portrait of one of American politics’ most beautiful friendships, the video works as an appealing, wonkily satisfying bromance reboot. As a fond look back at presidential comportment, intelligence and well-regulated emotions, it’s a welcome whiff of nostalgia.

But as an exercise in covid-19-era cinema, the title says it all. “A Socially Distanced Conversation” announces in no uncertain terms: For now, at least, this is what movies look like.

Hornaday can't see it that way. To borrow an old quote from her Biden-endorsing Post colleague George Will, she has only managed the tinny arf of a lapdog.