James Freeman at The Wall Street Journal takes up a topic the liberal media elites will avoid: State and local officials are discriminating against religious services as they grant wide berths to protests in the streets. He began with a joke headline from the Babylon Bee: “Clever Churchgoers Avoid Arrest By Disguising Themselves As Rioters."

Certainly, the New York-based television networks and The New York Times could notice the pretzel Mayor Bill de Blasio is making in the coronavirus enforcement regime. Aiden Pink of The Forward reported: 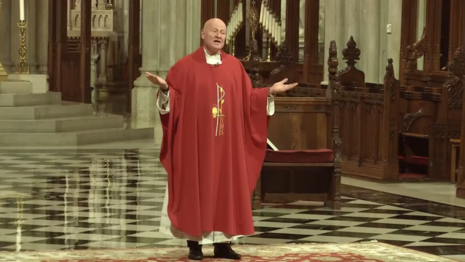 While appearing at a virtual press conference, de Blasio was asked by a reporter for the Jewish outlet Hamodia about what the reporter saw as an inconsistency between his support for the protests and his opposition to opening up synagogues or shops.

“What about the retail store owner facing imminent financial ruin or the religious person who cannot appear in their house of worship?” the reporter asked, adding, “Do we have one set of rules for protesters and another for everyone else?”

De Blasio responded with umbrage, saying that anyone thinking there are two rules “is not trying very hard to see the reality.” He added that the anguish over shopkeepers’ economic instability or parishioners’ inability to gather together en masse was not in the same league as protesting prejudice.

“400 years of American racism, I’m sorry, that is not the same question as the understandably aggrieved store owner or the devout religious person who wants to go back to services,” he said.

In Madison, Wisconsin, the Becket Fund for Religious Liberty have filed suit against Madison mayor Satya Rhodes-Conway and Dane County Executive Joe Parisi on behalf of the local Roman Catholic diocese. Their complaint says while religious services are capped at 50 people, “Under the order, shopping malls, bars, restaurants, spas, gyms, salons, museums, movie theaters, community centers, bowling alleys, skating rinks, trampoline parks and more are not subject to the 50-person cap. Madison’s mayor has also announced that public protests are not subject to government restrictions at all.”

We're left with the odd government ruling that church services are a threat to public safety, and public protests are too virtuous to possibly be categorized as dangerous. Reality intrudes, courtesy of the Madison-based Wisconsin State Journal:

For three nights, business on and around State Street in Downtown Madison have been sitting ducks for those who have taken advantage of the uproar over the killing of George Floyd to vandalize and steal their property. Almost every business on the street, from new ventures to those that have been around for decades, has been hit by graffiti, broken windows or looting. Above most of these properties are apartments occupied by residents, many of them terrified of what the nightly raids might bring.

It's a little heart-breaking to see shopkeepers who fully support peaceful protests have to clean up after most of their stock has been looted and their windows were smashed. But it should also be considered by the media that religious people feel it's transparently unfair to give an enormously wide berth to public protests and keep a tight lid on church services. If reporters are going to object when they're mocked as not exactly church-going, they could demonstrate some sensitivity to this imbalance.