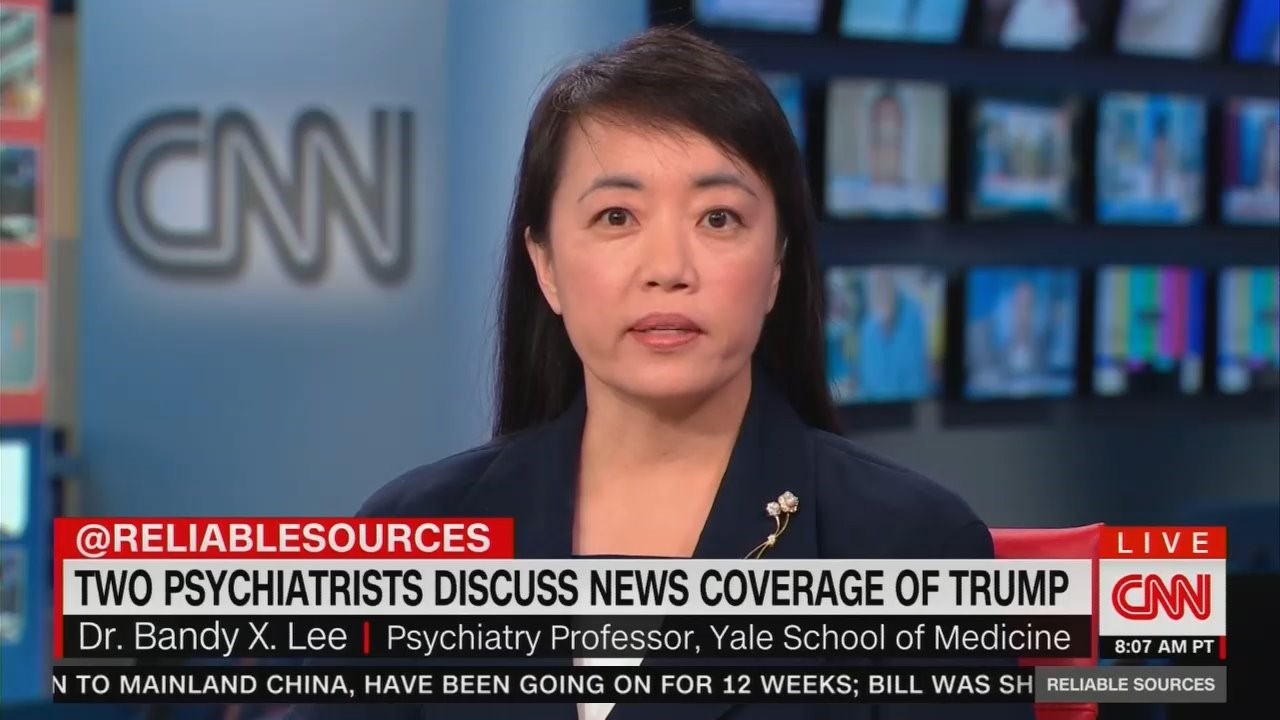 Exhibit A is Bandy X. Lee, who appeared on Stelter's show to promote her mental-fitness evaluation, insisted there is no comparison between Biden and Trump:

“A few stumbled words are not the same as the extreme danger that result from a list of signs that Donald Trump has shown,” Bandy Lee, a psychiatrist on the faculty at the Yale School of Medicine, told Yahoo News, “and none of them apply to Joe Biden.”

Lee edited a collection of essays written by 27 mental health professionals titled The Dangerous Case of Donald Trump, which detailed what the authors see as the risks posed by a leader who they regard as mentally and emotionally unfit for the most powerful office in the world.

After Yahoo listed a few Biden gaffes, Bandy Lee argued from intimidation -- why are we even talking about Biden when Trump endangers the entire world?

“None of them are catastrophically alarming the way the signs have been with Donald Trump. I think there needs to be a measure of proportion here. On the one hand, we have [in Trump] such mental instability and such great cognitive decline as well as neurological signs that show imminent risk to the entire human civilization, compared with some gaffes perhaps. If we’re not addressing the former, why are we even talking about the latter?”

Like a good Democrat, Knowles only found "mental health professionals" who trashed Trump and defended Biden:

Biden “digresses and gets tangential, that’s not cognitive decline,” Lynne Meyer, a California psychologist told Yahoo News. “Trump’s cognitive decline or problems are that he doesn’t even seem to have comprehension of reality. That’s what it looks like.”

In 2018, Meyer joined more than 70 other mental health professionals in signing a letter to Trump’s then-physician Randy Jackson requesting that the president be given a mental health evaluation.

“When you see a person that can’t even articulate words, and it doesn’t happen just once and doesn’t remember names — Tim Apple, or whatever,” Meyer said. “I don’t see the same thing with Biden.”

Barbara Kaufman, a psychologist in Maryland, agreed that Trump’s mental condition was a far bigger threat to the country than Biden’s.

“His mental illnesses have much more of an impact and are much more dangerous than what Biden has,” Kaufman said.

The Yahoo story concluded with another energetic spin from Bandy Lee: "I would emphasize that I would give attention to the overwhelming danger that we have before us. Until that is addressed, or unless that is addressed, I personally do not wish to hear about Joe Biden.”