Paul Crookston at the Washington Free Beacon captured a sickening moment on NPR's Morning Edition on Tuesday. All Things Considered anchor Ailsa Chang traveled to Beijing for the 70th anniversary of iron-fisted Communist Party rule and was interviewed by morning host Steve Inskeep. Chang touted how Red China's record on poverty is "spectacular."

Chang explained she came to assess "what promises did the Chinese Communist Party make 70 years ago, and what promises have they made good on, basically? Because, you know, in a lot of ways the CCP is a party of contradictions. It was once the party of revolution; it's now become the establishment here."

AILSA CHANG: It's communist in name, but it is not the party of the proletariat; it's the party of state capitalism. And it's a party that promised to lift people out of poverty, which, you know, to be -- truth be told, it has done a spectacular job of. In fact, it's lifted hundreds of millions of people out of poverty. But at the same time, income inequalities have intensified over the last few decades, and part of our reporting here has been trying to understand how those inequalities have played out over different generations within different classes of people.

INSKEEP: Who have you been able to talk with?

CHANG: Well, we spent some time with migrant workers who had moved to Beijing 30 years ago from the countryside. And these are guys who work seven days a week, 10 hours a day, and yet they still say their lives are hundreds, even thousands, of times better than their parents' lives. Those are their exact words.

And that gets to one of the party's central promises, which is if you work hard and you trust us, we will make your life better. And we found that that message actually resonates with people from totally different backgrounds here.

Chang admitted the Chinese regime told the NPR crew "our credentials didn't even allow us to interview anyone on the street or take any pictures while walking around the city." Still, they turned to 28-year-old architect Grace Jin, and enjoyed her dig at President Trump.

GRACE JIN: So I don't care who is the leader in China.

CHANG: Do you really not care, or you just know you can't choose anyway?

JIN: Maybe both. But just in China, maybe we know the leader would make steady, wise choice, unlike (laughter) the United States.

CHANG: Unlike the United States. So what she's saying is, you know, in the end all she wants is stability to focus on her career, on success, and she says that is exactly what the Chinese government is giving her.

Inskeep did ask Chang about Hong Kong, and she gave him back the communist boilerplate from Xi Jingping: "He reiterated that Hong Kong will always be a part of China. It's one country, two systems. And he vowed that China will always maintain stability in Hong Kong. He said, specifically, no force can shake the status of our great motherland. No force can obstruct the advance of the Chinese people and Chinese nation."

Anyone expressing disgust at President Trump's gushy tweet to Xi might want to express disgust with NPR. 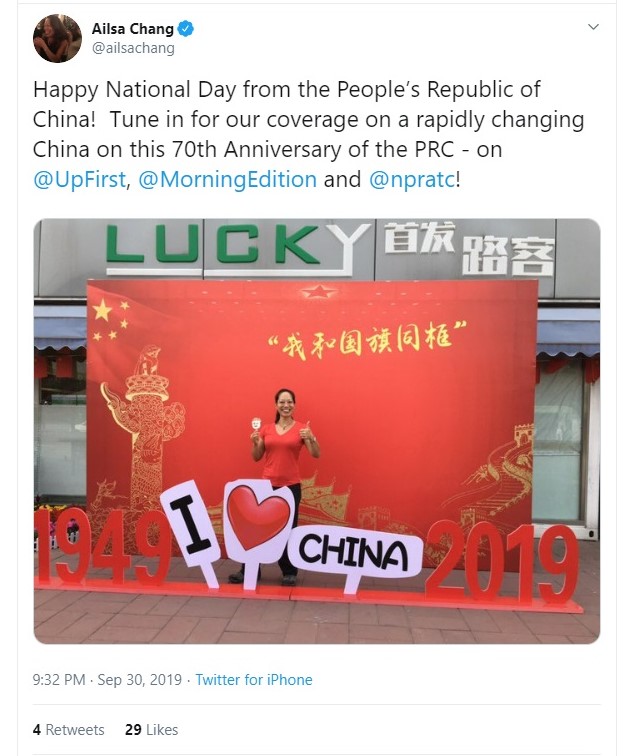