Twitchy editor Greg Pollowitz noted on Saturday that PolitiFact is so senstive about Joe Biden that it gave a "Mostly False" rating to a Facebook post showing a photo of Biden holding hands with former Senate Majority Leader Robert Byrd: "PolitiFact has done it again, this time ruling that a 100% real photo of Joe Biden with former KKK leader Robert Byrd is mostly false because the caption referred to Byrd as a Grand Wizard and not his correct title of Exalted Cyclops."

PolitiFact's Ciara O'Rourke introduced an objection to a post with about 1,400 shares on Facebook by the Enlisted Nine Fight Company, a veteran-owned apparel business: 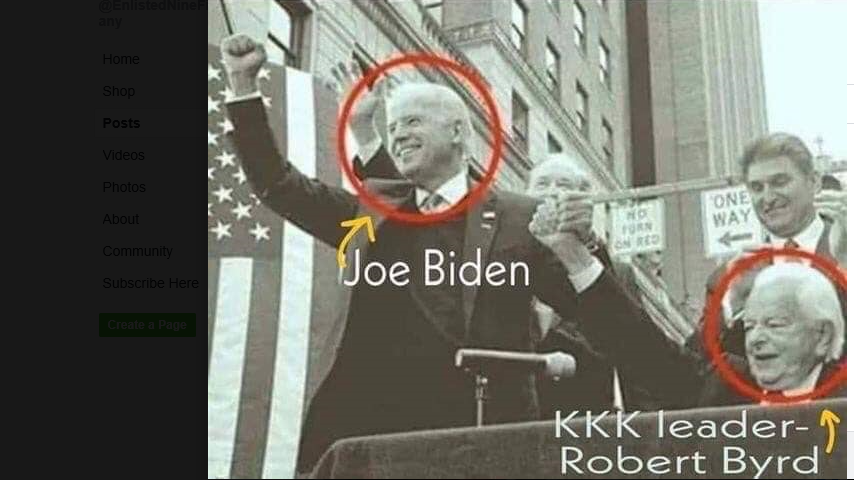 An old photograph of former Vice President Joe Biden has been circulating online as some social media users try to tie the Democratic presidential candidate to the KKK.

"Biden with the Grand wizard of the KKK," the Aug. 9 post says. "So who again is playing you, lying to you, using you for the votes, Creators of the KKK, opposed civil right (sic) of blacks. Yup thats (sic) the Democratic party."

The black and white photo beneath the words shows Biden holding hands with then-Democratic U.S. Sen. Robert Byrd of West Virginia, who the post identifies as a "KKK leader."

The post, which had been shared more than 1,400 times by Aug. 15, was flagged as part of Facebook’s efforts to combat false news and misinformation on its News Feed.

PolitiFact acknowledged that the photo was real, taken by Associated Press in 2008. And they acknowledged Byrd's membership in the KKK in the 1940s, organizing a 150-person chapter in West Virginia and serving as an "Exalted Cyclops." But they can't ignore what isn't true in this meme -- that Byrd wasn't a KKK leader in 2008. "Mostly False" translates to "Democrats are mostly virtuous."

Conservatives would suggest they can't abide the meme that the Democrats used to be the party of segregationists and the Klan. Sen. Strom Thurmond also renounced his segregationist views, but he switched parties, so liberals never stopped associating Republicans with Thurmond's past.

Meanwhile, we'll hope that PolitiFact will soon arrive at the Washington Post report on how badly Biden mangled a medal-pinning story about a soldier serving in Afghanistan.

The Facebook post claims that Joe Biden was photographed with Robert Byrd, Grand Wizard of the KKK. That exaggerates Byrd’s role in the KKK.

In the 1940s, Byrd organized and led a local Klan chapter as its Exalted Cyclops, but he wasn’t a Grand Wizard. And he ultimately renounced his views from that period of his life though his past and former ties to the KKK were raised throughout the rest of his life.

By the time this photo of Byrd and Biden was taken, Byrd’s public expressions of regret and shame over his earlier involvement in the KKK was well-documented and often-repeated.

Since the meme doesn't say "former KKK leader," but came rushing to the defense of Biden's image on race, PolitiFact earns the rating "Half Baked." For more, see our Fact-Checking the Fact-Checkers page.