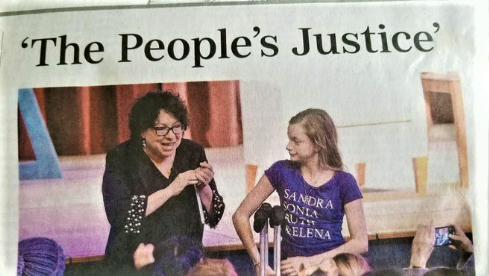 The top of Friday's USA Today offered a sugary valentine to Supreme Court justice Sonia Sotomayor, hailed with the words “‘The People’s Justice.’” Underneath, the subhead added: “Supreme Court’s intrepid Sonia Sotomayor is liberal warrior on the bench and off.”

Reporter Richard Wolf, a longtime practitioner of liberal bias, touted Sotomayor leaping all over the oral arguments at the high court:

After 10 years on the Supreme Court, Sotomayor, 65, is not only its most outspoken questioner – succeeding the late Justice Antonin Scalia, who inspired today's "hot bench" – but its most frequent public speaker and most prolific author. Her voice, in all its forms, has become the liberal conscience on a conservative court, one that speaks out in defense of minorities, immigrants, criminal defendants and death row inmates.

A liberal law professor who's written for Slate, HuffPost, and The New Republic basically wrote the top headline:

David Fontana, a George Washington University law professor, has called Sotomayor "The People's Justice" because of her ability to move beyond legal and academic elites to everyday audiences. It's a role, he says, that's as vital as the one she fills on the bench.

"It’s partly her votes, but it’s partly her voice, too," Fontana says. While liberal Associate Justices Stephen Breyer and Elena Kagan focus on influencing their conservative colleagues on legal issues, he says, Sotomayor is "playing that outside game – persuading people out there in the world, not just on the court.”

Wolf touted Sotomayor's "wise Latina" comments -- that they make better decisions that white men -- as a plus, not a minus:

Sotomayor's Hispanic connections run deep. During her Senate confirmation hearing in 2009, she was forced to explain her hope that "a wise Latina woman, with the richness of her experiences, would more often than not reach a better conclusion than a white male who hasn’t lived that life.”

Her explanation stressed what she has sought to do ever since: inspire young people of all ages and backgrounds "to believe their experiences would enrich the legal system." She has embraced her roots, returning frequently to her native Bronx, N.Y., as well as to Puerto Rico, where her parents were born. Her public appearances, from Alaska to South Africa, often draw thousands; her autobiography and children's books, tens of thousands more.

That makes Sotomayor more than a Supreme Court justice: She is a role model. Speaking recently at George Washington University to an audience made up largely of Hispanic grade-school students, she urged them to read her recent children's book, Turning Pages: My Life Story, in English or Spanish.

Sotomayor has become a millionaire on the court through her books and public appearances. This is also touted as a plus, as a nationwide insprational tour:

Obama's selection of the nation's only Hispanic justice was historic at the time, and Sotomayor has used her fame for both fortune and inspiration. Her books, led by her 2013 autobiography My Beloved World, have made her a millionaire. Her speeches have returned her to the hardscrabble neighborhoods of her youth.

During the past five years, she has made more public appearances than any of her colleagues – 184, according to a tally by SCOTUS Map, which attempts to track the justices' events. That's more than the iconic Ginsburg and more than twice as many as most of the justices.

This is quite the contrast to USA Today on Justice Brett Kavanaugh, who was painted as a predator who shouldn't be coaching girls' basketball.