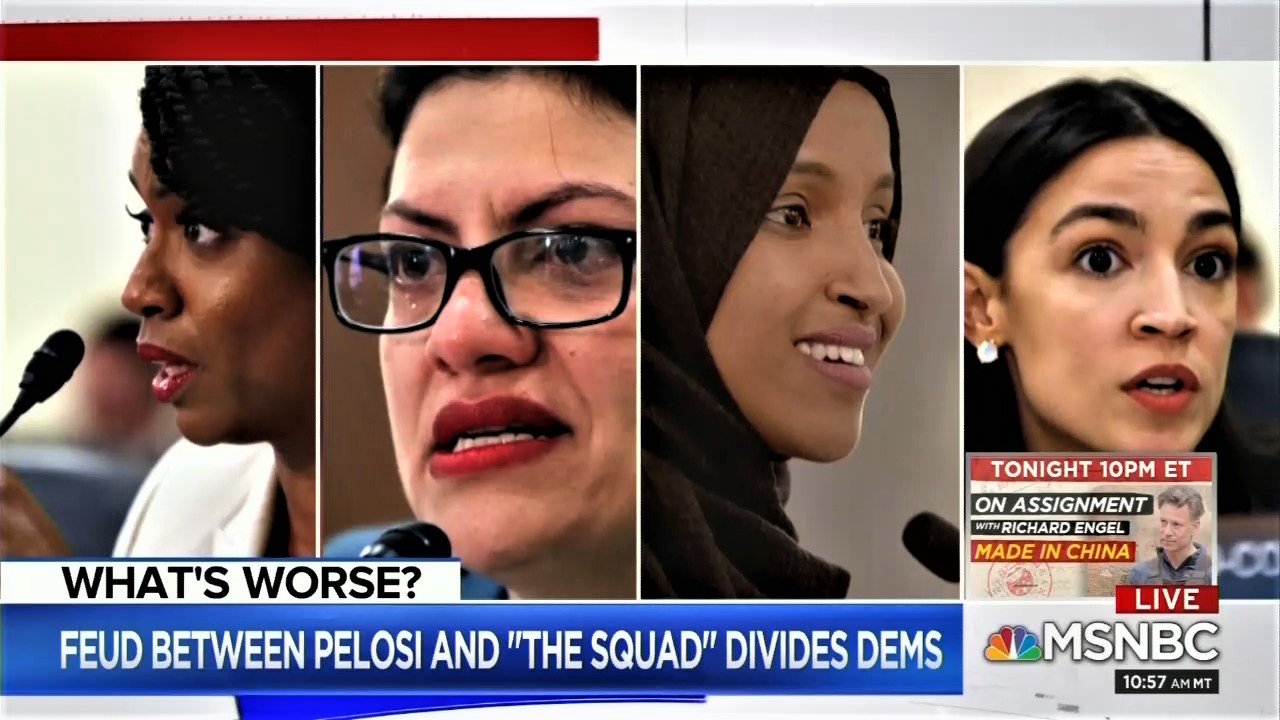 -- Rep. Alexandria Ocasio-Cortez was recognized by 74% of voters in the poll; 22% had a favorable view.

-- Rep. Ilhan Omar of Minnesota — another member of The Squad — was recognized by 53% of the voters; 9% (not a typo) had a favorable view.

Alexi McCammond of Axios rolled out these numbers on ABC's This Week on Sunday, and explained "That presents a clear problem to Democrats not just for the presidential but for hoping to keep onto the House and make gains in the Senate when swing voters are telling them we know and extremely dislike socialism and we don’t want a party that stands for that."

So the networks are going quiet on this story. They're lobbing bombs at Trump for attacking AOC, Omar & Co. and avoiding any focus on their impact among voters.

MSNBC's Weekends with Alex Witt briefly noted it at midday Sunday, and former Newsweek reporter/columnist Jonathan Alter was brutal in laying down the Pelosi vibe. He said the Republicans will make sure we all focus on these people, and it will hurt Democrats throughout the election cycle.

JONATHAN ALTER: I think there's some -- panic might be too strong a word, but real concern about doing what Barack Obama has warned them against, which is forming a circular firing squad. Now In a normal political environment, if you have intra-party squabbling, you know, it's just part of politics. But as Eleanor Roosevelt said, this is no ordinary time. We must get this menace out of office! And anything that Democrats do to squabble among themselves and make it harder to have that happen is really detrimental.

What this poll suggests is that The Squad, as they are called -- AOC and a couple of her compatriots -- are extraordinarily unpopular. Now that's partly as a result of the GOP painting a target on their back. They're doing to AOC what they used to do to Pelosi, turning her into a Cruella DeVil. And that works, and what's amazing is how high their name recognition is. Republicans and the press, between the two, have gotten these folks to be really well known. It will present a problem for whomever the Democratic nominee is. We will be talking about this all the way to the election, and it will be hurting Democrats all the way to the election.

"If all voters hear about is AOC, it could put the [House] majority at risk," said a top Democrat who is involved in 2020 congressional races. "[S]he's getting all the news and defining everyone else’s races."