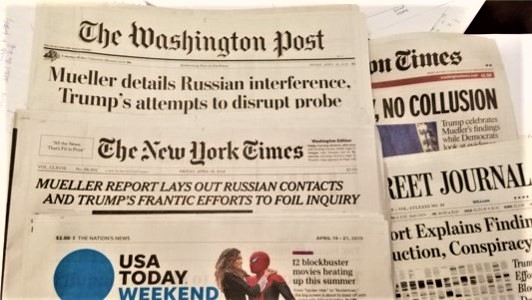 President Trump happily greeted the Mueller report release by saying "No collusion, no obstruction." The nation's Trump-loathing newspapers weren't going to paint this "historic day" as a positive day for Trump. The Washington Post front-page headline under the top photo said it all: "Frame it however you like, but it's a damning portrait of Trump's presidency."

In other words, the Post was framing Trump as it does every day. That could be their motto: "A Damning Portrait of Trump's Presidency."

The top headline was "Mueller details Russian interference, Trump's attempts to damage probe." That's an accurate summary, but Mueller's probe was a criminal investigation that found no criminal offenses by the President or his family, as liberals eagerly expected. There's nothing "new" in the Russian-interference story, except that Mueller said there was no proof of Trump collusion in Russian interference.

Other Post headlines on Page One included "Again and again, president's aides refused to carry out his orders," and "Question of obstruction seemingly tossed to Congress" (seemingly?), "Trump's efforts to obstruct were clear, Democrats say, but impeachment isn't," and "Offers from Russia were not reported or forcefully rejected by campaign."

On Twitter, CNN's Brian Stelter pointed out that the Post had that headline when William Barr's four-page letter came out, "Mueller finds no conspiracy." So then, why must the report take up the entire front page?

The Washington Times showed the opposite take in all caps with "NO RUSSIA CONSPIRACY, NO COLLUSION." A headline below noted "Trump celebrates Mueller's findings while Democrats look at evidence of obstruction." The Post couldn't find any space for "Trump celebrates" or what "Republicans say."

The New York Times also went with all-caps: "MUELLER REPORT LAYS OUT RUSSIAN CONTACTS AND TRUMP'S FRANTIC EFFORTS TO FOIL INQUIRY." The other Trump headlines were "Culture of Chaos Rooted in the Oval Office," "No Charges of Criminal Conspiracy and No 'Judgment' on Obstruction (there's a bit of bend on "no conspiracy"), "Findings Detail Trump's Efforts to Raise Shield," and "Defended by Barr, President Gets the Attorney General He Sought."

This is where you point and laugh at this paper's Twitter ads that you subscribe to them for "Objectivity."

USA Today had a huge headline in capitals "WHAT WAS REVEALED," and the one front-page story was headlined "Trump tiptoed on the edge of obstruction." That's a Democrat-friendly spin. At least there was a picture of Trump and his quote "I'm having a good day....no collusion, no obstruction."

The Wall Street Journal front page seemed the most down-the-middle with "Mueller Report Explains Findings On Obstruction, Conspiracy," even if it's leaves out the "no" part. The Journal and The Washington Times found other stories to put on the front-page besides Mueller findings.

Many noticed the contrast in New York tabloid front pages: "TRUMP CLEAN" for the New York Post versus "LOW BARR" for the Daily News.