The Washington Post gossips -- "The Reliable Source" -- pretended they weren't doing a rerun in Thursday's paper, promoting a Stormy Daniels chat plugging her book Full Disclosure -- which came out five months ago. 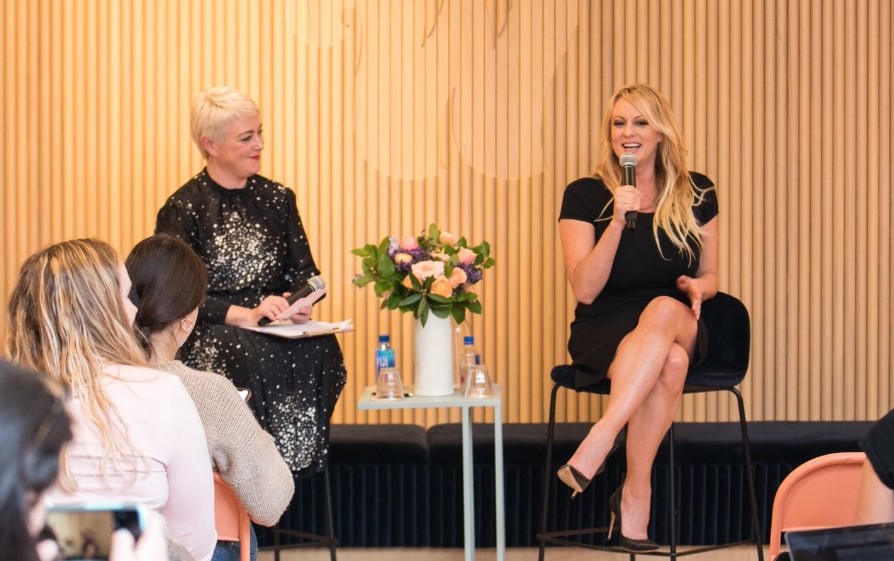 Stormy Daniels's fan base has changed. While generally always pretty popular with the male species, now women are flooding her performances as well.

"They come in droves," the adult-film star and director said. "Wearing matching shirts with my face on them."

Daniels's Tuesday talk with journalist Jane Mulkerrins at the Wing, Georgetown's all-female co-working and social space, was no exception. Alas, no Stormy Daniels T-shirts were spotted, but the fandom was real: Women packed the room so densely that it was hard to walk, let alone find a decent spot to stand.

Whether she likes it, Daniels has become one of the poster children for the liberal and feminist movements, although she's not sure she qualifies for either role.

But she welcomes the platform to share her truth -- hence, the publication of her tell-allâ€š "Full Disclosure," in October. The decision to write the book came after Daniels was disappointed by the way the media covered her story, starting with her 60 Minutes interview with Anderson Cooper, which she said was edited to cut out the important information in favor of salacious details.

"I sold myself out and didn't get anything out of it," she said. So she took matters into her own hands. "I wanted my daughter to get the full story one day."

They skipped the part where Stormy said Michael Cohen was "dumber than herpes."

The whole thing was a tired repeat of a Post gossip item by Emily Heil published on December 5, 2018 at the liberal DC bookstore Politics & Prose.

The event had all the trappings that attendees of such gatherings are used to: neighborhood bookish types perched on folding chairs, an august moderator (Sally Quinn, the former Washington Post writer and noted Georgetown social doyenne), and a well-known author.

But the curses tumbling from Daniels's lips clued attendees in that this was no ordinary Washington Book Thing, as did the pre-show announcement that she wouldn't be sticking around to mingle or sign books afterward, as she had a pressing engagement - performing at a D.C. strip club....