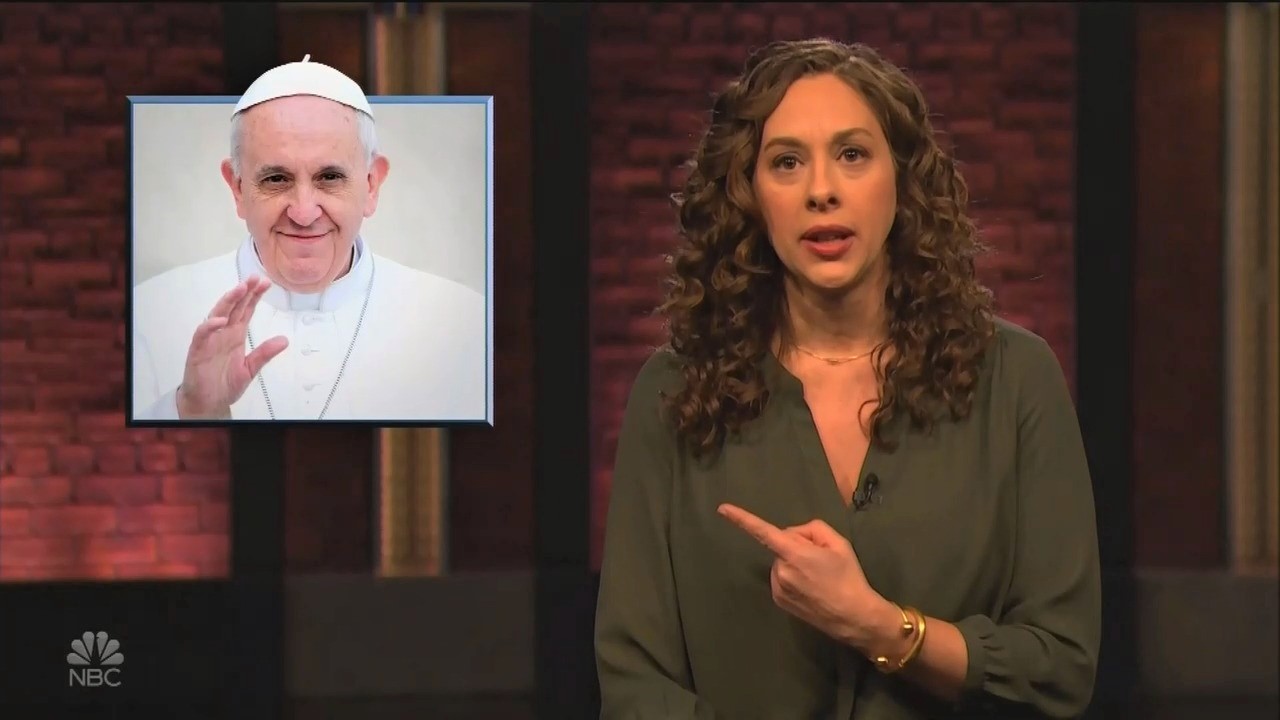 On Monday night’s Late Night with Seth Meyers on NBC, his staff writer Jenny Hagel uncorked a commentary attacking Pope Francis as a fountain of “hate speech.” In a new book-length interview titled The Strength of a Vocation, the Pope said the Catholic Church shouldn’t be scandalized by sexually active (and activist) homosexual priests. It’s not exactly a new stand for Popes, but this one was supposed to be "cool":

“I say to the priests, gay religious men and women,” the Holy Father forthrightly stated, “we must urge you to live fully celibate and, above all, to be exquisitely responsible, trying not to scandalize your communities or the holy faithful people of God by living a double life. It is better that you leave the ministry or consecrated life rather than live a double life.”

Concerning candidates for the priesthood or religious life, Pope Francis said, “Homosexuality is a very serious issue that must be adequately discerned from the beginning with the candidates,” adding, “The Church recommends that people with this ingrained tendency not be accepted into the ministry or the consecrated life. The ministry or the consecrated life is not his place.”

Meyers introduced Hagel as "both gay and Catholic."

JENNY HAGEL: This is Pope Francis. When he first became pope, everyone was like, "This guy's cool." He hung out with Leonardo Di Caprio. He said all of our pets are going to heaven. And while other popes have driven around in Mercedes-Benzes, Pope Francis drives a Ford Focus. Which probably helps with the whole celibacy thing. [Laughter]  So the press dubbed him "Cool pope." But here is the thing. This guy's not cool. This guy's homophobic.

Hagel complained "the pope is a world leader who's giving people permission to be prejudiced. I'm gay and I'm Catholic. When I came out, some people in my family told me that I was going to Hell. They got that idea at church. The same church that thinks it's a good idea for 300 people to drink out of the same cup. [Laughter, applause] Gross! That's gross!"

That's a reference to wine offered during the Eucharist. The lecture kicked in:

HAGEL: This guy isn't cool. Do you know what's cool? Telling LGBTQ people that they are perfect and beautiful and whole just the way they are. This dude may seem harmless because he's shuffling around in a white robe. But remember, white robes are the official uniform of people with bad ideas. Exhibit A [picture of young Donald Trump in a white robe].] I went to a Catholic high school, and they sent me an e-mail last week asking me for money. I'll give you money when you send a second e-mail saying that everyone who went to your school is created equal.

She concluded: "Hate speech is hate speech and we need to call it out, no matter where we see it, even if it's in a Ford Focus."