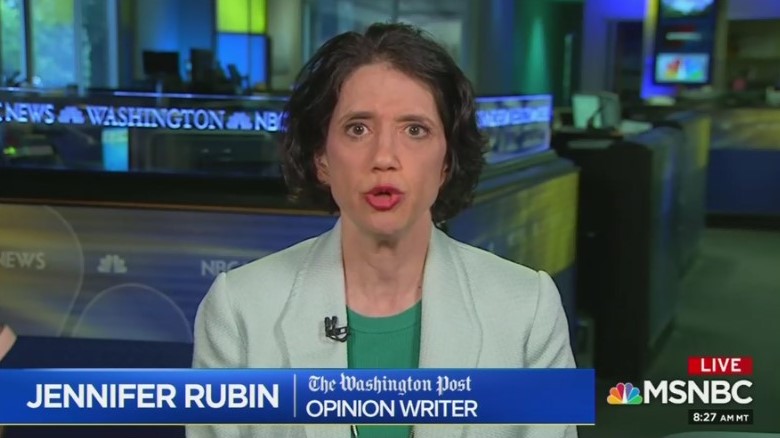 NPR has invited on a rotating group of liberal and conservative panelists in recent months for their Week In Review panel on All Things Considered. On Friday night, they rigged that system by matching a topic with a "conservative." The topic was whether Sarah Huckabee Sanders was right to complain that the media "attacked me personally." The "conservative" was Jennifer Rubin -- described by NPR host Ailsa Chang as the "Right Turn" columnist for The Washington Post -- who is precisely one of those who have attacked Sanders, harshly and personally.

SARAH HUCKABEE SANDERS: The media has attacked me personally on a number of occasions, including your own network, said I should be harassed as a life sentence, that I should be choked. When I was hosted by the Correspondents' Association, which almost all of you are members of, you brought a comedian up to attack my appearance and call me a traitor to my own gender.

AILSA CHANG: Susan, should it even matter whether the president's press secretary personally thinks the media's the enemy of the people?....Is that even relevant?

This allowed Susan Glasser of The New Yorker to make the usual lecture, claiming their hostility to Trump is a "constitutional norm," that "a robust, free, critical discourse is not about whether they like you at the White House Correspondents' Association or not. It's a fundamental tenet of our constitutional system. And I think it's one of the areas in which the Trump administration has really shown a clear-cut disdain for the norms of American government as any previous administration."

Do they think their fawning treatment of Barack Obama qualifies as a "robust and critical discourse"?

Chang then turned to Rubin, who was pretty much quoted by Sanders on "I should be harassed as a life sentence." Rubin ranted on MSNBC on July 1 that "Sarah Huckabee has no right to live a life of no fuss, no muss, after lying to the press -- after inciting against the press. These people should be made uncomfortable, and I think that's a life sentence frankly."

But NPR didn't make that clear at all:

CHANG: But, Jennifer, does Sarah Sanders have some legitimate complaints? I mean, has the press been especially hard on her personally?

RUBIN: I don't think so. She has gotten up there day in and day out and lied to our faces. She says black is white and white is black. This is not a normal press secretary who will put the best spin possible on the existing facts. This is someone who lies. And as a result, there has to be a point at which she is held accountable. What I find so interesting is the Trump people now consider themselves the same as America. If someone is mean to her, that makes them an enemy of the people. Arguably, that just makes an adversary of Sarah Huckabee Sanders. But in her mind, she is the people, and that's a totalitarian mindset.

This is such a setup that conservatives should feel free to complain to NPR Ombudsman Elizabeth Jensen. NPR should have at least disclosed that Sanders was complaining specifically about Rubin if they were going to ask Rubin about whether the criticism was warranted.