The first questionable habit of the liberal Fact Checkers is to nitpick tweets, especially Trump tweets. There can be outrageous and blatantly false statements in a tweet, but often tweets use a political shorthand. The headline was "AP FACT CHECK: Trump wrongly claims GOP can hold top court".

On Twitter, they summarized in a patronizing manner: "Trump asserts Republicans must always hold the Supreme Court. But the court, while shaped by political changes, is the unelected branch of government that can't be held by any party." AP's Mark Sherman set up his tweet-and-response fact check this way:

TRUMP: “THE SECOND AMENDMENT WILL NEVER BE REPEALED! As much as Democrats would like to see this happen, and despite the words yesterday of former Supreme Court Justice Stevens, NO WAY. We need more Republicans in 2018 and must ALWAYS hold the Supreme Court!”

THE FACTS: Gun rights activists have seized on the [New York Times] column by Stevens, who was a registered Republican but a member of the court’s liberal wing, as proof that Democrats are trying to undermine the Second Amendment guaranteeing the right to bear arms. Democratic leaders haven’t called for repealing the amendment, which they say does not preclude reasonable gun control measures.

The Stevens op-ed was shocking in its overt advocacy, but Noah Rothman at Commentary notes that Democrats favor large-scale restrictions in gun ownership:

A YouGov survey taken in late February found that 82 percent of self-identified Democrats “strongly” or “somewhat” favor a total ban on semi-automatic firearms. These poll respondents might not know that such a ban would effectively outlaw most pistols and rifles in private hands, but it’s also fair to say that a substantial number of Democratic poll respondents don’t seem to care. A bare minority, 44 percent, said they would support banning the sale of handguns to anyone who wasn’t a law-enforcement officer—essentially, the repeal of the Second Amendment in all but name.

If Barack Obama or Hillary Clinton had tweeted "We need more Democrats in 2018 and must ALWAYS hold the Supreme Court," AP would get "the gist" of what these geniuses were implying and there would be no "fact check" written. But they assume Trump isn't smarter than a fifth-grader. It's why AP's Fact Check could be called "Trump Check." 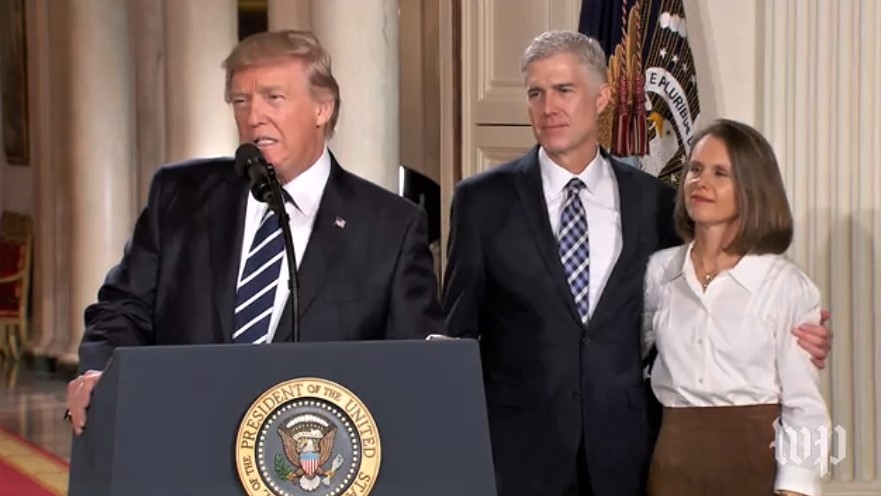 Sherman was right to note that "Until recently, party label and ideology did not always go hand in hand," that JFK-nominated Byron White was one of two votes against Roe v. Wade and that several Republican nominees from Earl Warren to David Souter turned out to be reliable liberals.

But Sherman admits, in the current context, that it looks largely accurate, and not "wrong," to imply that Republican control of Congress will yield a Republican-friendly court:

But Trump is right that Republican-nominated justices have formed a majority of the Supreme Court for nearly 50 years and, since Stevens’ retirement in 2010, ideology and party have aligned. The five more conservative justices were appointed by Republicans, while the four more liberal justices were Democratic nominees.

That’s why the stakes were so high after conservative Justice Antonin Scalia died in 2016. If President Barack Obama’s nominee, Merrick Garland, had been confirmed, it would have flipped the ideological and partisan majority of the court.

That is exactly the spirit of Trump's tweet: We need more Republicans in the Senate to confirm judges who will prevent full or partial repeal of the Second Amendment.

We have rated this "fact-check" by the Associated Press as Deeply Distorted. For similar analyses, please visit our Fact-Checking the Fact-Checkers site.