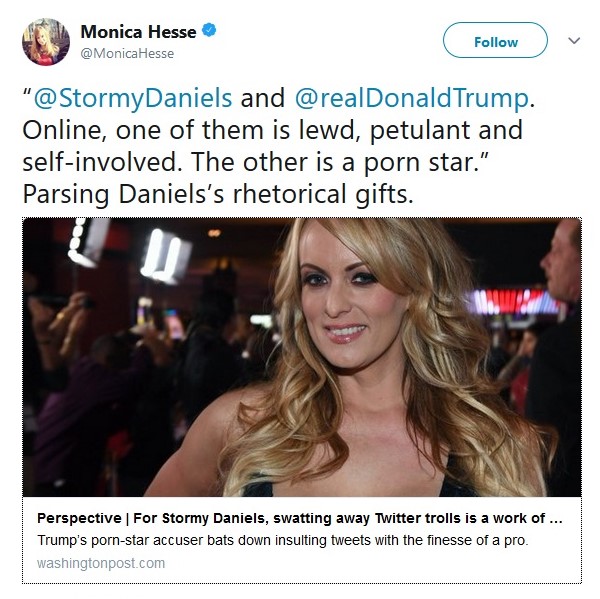 The headline on the front of Monday's Style section was "Trolls are no match for Stormy Daniels." Online, the headline was more complimentary: "For Stormy Daniels, swatting away Twitter trolls is a work of art." Hesse began: "Stormy Daniels on Twitter has the air of a very smart cat batting off a series of very dumb mice, who come at her under the delusion that the relationship is reversed."

The reported tweets here are from people who misspell "skank" in various ways, like one guy with "his whopping 10 followers" tweeting "Stormy is not a skanc, she's an all out Pig and whore." The cherry-picking is obvious. These trolls have never had more publicity.

Hesse ended with the same Awesome Stormy echo: "The thing is, sometimes people think they're grabbing pussycats when they're actually grabbing lions."

It's possible that Daniels is telling the truth about having sex with Donald Trump in 2006. It's obvious to everyone that Trump has cheated on wives before. His affair with Marla Maples was New York tabloid fodder, spread to a national audience. If a voter would prefer a president who doesn't have a troubled marriage, they couldn't have voted for Hillary Clinton, either.

Still, the charge of a presidential candidate paying an accuser to keep quiet is an obvious news story. That doesn't mean you have to praise the accuser as a master Tweeter.

Any woman who has ever laughed off an insulting comment because she feared the repercussions if she didn’t knows exactly what strings Daniels is pulling online....Angry men have to be teased an purred at, in a self-deprecating way, even when the goal is to get them to leave."

In other words: You don’t get to be an adult performer without learning how to handle men. And Daniels knows how to handle them all the way out the door.

The reverse sexism runs strong. The headline inside the paper was "Stormy Daniels leaves sad, angry men 'unavailable.'" This is because she puts those Bible-thumpers in their place:

Her best smackdowns are impossible to fully appreciate now: The men they were directed toward have deleted their original insults, presumably embarrassed by the verbal beating. “You know you’re supposed to read that Bible and not smoke it, right?” she wrote in response to a tweet that now comes up only as “unavailable.”