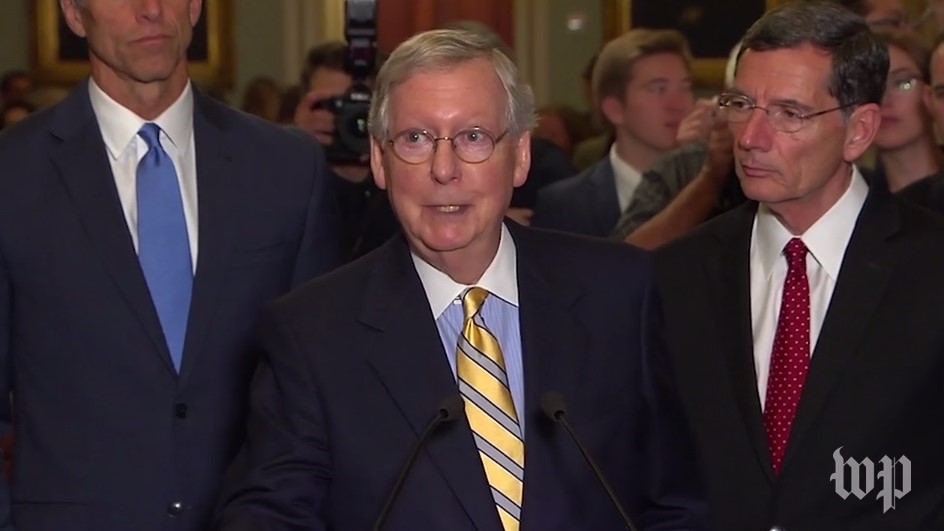 Both The New York Times and The Washington Post carried the same political narrative out of the Fourth of July: Republicans on the defensive, laying low. It’s one of their favorites.

The Times headline as “With Voters Riled, GOP Senators Lie Low: Health Care Concerns Intrude on July 4 Festivities.” Four reporters were needed to issue this narrative: “It is a tough summer for Senate Republicans, who are trying to combine a long-promised repeal of the Affordable Care Act with a replacement that has, in legislation drafted so far, been as popular as sunburn.”

It apparently took four reporters to chronicle politicians who were avoiding public events. Then there were opponents of the bill: “On Tuesday, Ms. [Susan] Collins and the few other Republican senators who ventured out — most of them opponents of the current bill, and most in rather remote locales — were largely rewarded with encouragement to keep fighting.”

The Post sassily summarized on their home page that while Collins drew an atta-girl for resisting the health-care revamp, “Other senators — the few who let voters know where to find them — spent the Fourth of July recess fending off protesters.” They only needed three reporters for their spin patrol.

The online headline was “At parades and protests, GOP lawmakers get earful about health care.” Their three reporters included one in Washington, one in Maine with Collins, and one in Alaska with Sen. Lisa Murkowski. (They also reported on Ted Cruz, but had no reporter in Texas.)

The Post account did note that a “progressive” group is using this harass-Republicans-everywhere strategy to resist any attempt to touch Obamacare:

“Thinking back to February recess, it was all we could do to keep up with your energy and follow all the incredible actions you took,” Indivisible organizers wrote in a weekend fundraising message to supporters. “Over June, we were able to [move] methodically to target senators in specific states while also facilitating coordinated actions across the country. And as the delayed bill proves — THIS WORKS!”

In New York, two Long Island activist groups are planning “health-care cook-outs” close to the offices of Rep. Peter T. King (R-N.Y.) and Rep. Lee Zeldin (R-N.Y.), under the motto “We can’t let seniors, children and people with disabilities GET BURNED!” Topher Spiro, the vice president of health policy at the Center for American Progress, urged activists on Twitter to keep organizing, whether or not Republicans would face them.

“Protesting Trumpcare this week is the pinnacle of democracy and patriotism,” he wrote. [Emphasis mine.]

The four-staffer Times story revealed the “news” that Sen. Cory Gardner spent the holiday with his kids:

This was still more activity than anything done by Mr. Gardner of Colorado, who has not held a town hall-style meeting this year. Coloradans have noticed. In February, hundreds gathered for a mock town hall-style meeting in Denver, where they addressed questions to a cardboard cutout of the senator. Last week, wheelchair-bound constituents occupied his office for 60 hours in protest of cuts proposed in the health bill, before being dragged out by the police.

Mr. Gardner’s Fourth of July was devoid of public events, though on July 3, he could be seen on his front lawn in his hometown, Yuma, playing with squirt guns and smoke bombs with his children.

This was as combative as his holiday was likely to get. 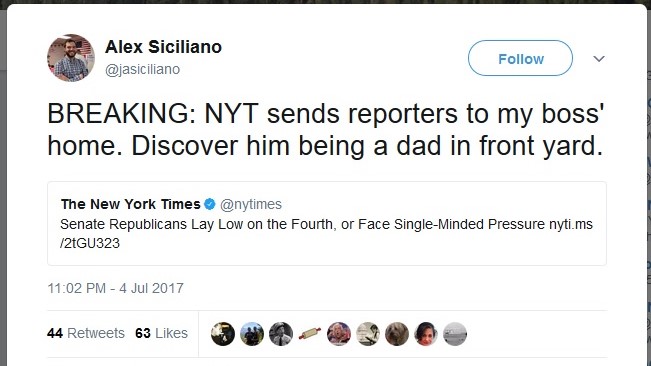 Right there on the front page of the Times on Wednesday, they reported Sen. Rob Portman of Ohio had no public events for the day. Oops. They had to correct, but you wouldn't know that if you were just reading the paper:

An earlier version of this article incorrectly reported that Senator Rob Portman, Republican of Ohio, had no public events on July 4. Mr. Portman marched in two parades.

MRC's Rich Noyes noted that eight years ago, the media were quiet. "A second wave of rallies in cities across the U.S. was virtually ignored by the three broadcast networks, who were instead providing wall-to-wall coverage of the death of pop star Michael Jackson." Only CBS mentioned the protesters.