Geoffrey Dickens noted Charlie Rose interviewed Al Franken for most of his hour on Wednesday and never brought up Kathy Griffin. The same thing happened on the PBS NewsHour. And a search of National Public Radio transcripts comes up empty for Kathy Griffin stories.

(UPDATED: In response to the original "Zero Seconds" headline, NPR media correspondent David Folkenflik tweeted at me: "not true- I did a one minute news story that aired 3x." We'll assume that means the top-of-the-hour newscast in three different hours, as I relayed was possible in the original post. It remains true that there were no Griffin features listed in NPR's transcribed news segments.) 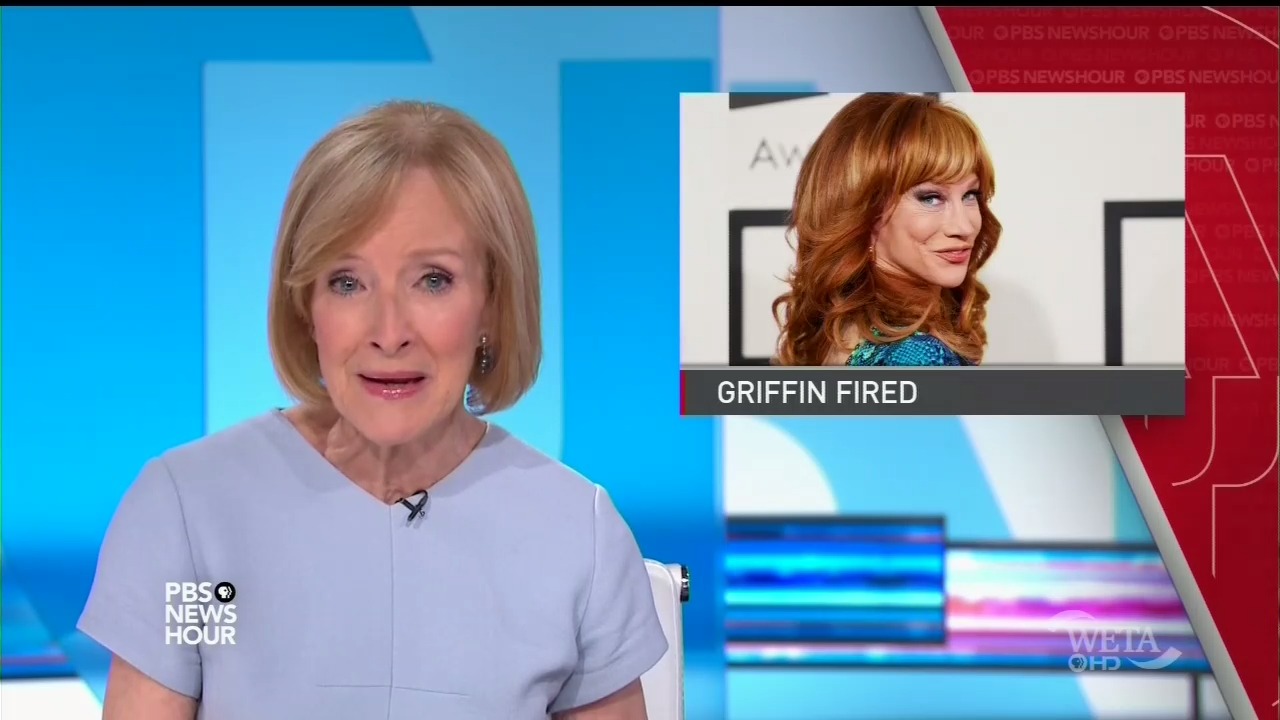 Judy Woodruff offered this 19-second (46-word) anchor brief at the very end of the program’s news summary and there was no airing of the offending photograph:

WOODRUFF: And CNN has fired comedian Kathy Griffin from its New Year`s Eve broadcast, after she posed with a prop resembling the severed head of President Trump. The image drew widespread condemnation, and the president tweeted that it was, quote, "sick." Griffin has issued an apology.

So much for public broadcasting standing against the coarsening of public discourse.

At the beginning of his six-and-half-minute interview with Senator Franken, NewsHour anchor Hari Sreenivasan went straight for the throat: Jared Kushner’s throat.

HARI SREENIVASAN: There`s quite a bit of news recently about the president`s adviser and son-in-law Jared Kushner. We have heard that he wanted to set up a back channel of communication with the Russians. Before that, we know that he didn’t declare any of these contacts on his security clearance form.

SREENIVASAN: So, has he already broken the law by withholding information on that form?

FRANKEN: The special prosecutor will look at whether it’s a violation of the law. You're supposed to. There’s been a lot of these, not disclosing meetings with the Russians, by a lot of members of the Trump team. And they're not acting like a group of people that have nothing to hide. Put it that way.

In other words, PBS is interviewing Franken with just as many Democratic talking points as if he sat down in the DNC headquarters for an interview.

It’s interesting that Franken can both suggest that Senators need to be collegial at the same time as he’s noting he ruined his friendship with Jeff Sessions by opposing him fiercely as Attorney General. Notice how the PBS anchor doesn’t push at all on the inherent conflict in poses, or ask him if he regrets his behavior or feels like he betrayed his friend:

SREENIVASAN: Your line of questioning of Jeff Sessions, he ended up answering a question that you didn't ask.

SREENIVASAN: And, eventually, it led to his own recusal from the Russia investigation. But in the book, you say that you have come to befriend him, that his wife made your grandson his first baby blanket.

FRANKEN: I think the friendship happened before those hearings. (Laughter) And I haven`t talked to him since.
You know, I -- Jeff and I served together on the -- Sessions -- Senator -- Attorney General Sessions and I -- and I disagree with him. I think he is a terrible attorney general. I will say that.

But, yes, you have to get along with your colleagues. There's a -- we're a small town of 100 people. And there is no sense making enemies. And so, yes, Jeff and I had a friendly relationship. And, yes, Mary Sessions made a blue blanket for my first grandson. It was his favorite blanket.

NPR did have time on Wednesday night's All Things Considered for a ten-minute segment on the "world's worst video game," an Atari game based on the Stephen Spielberg movie E.T. It's possible that the top-of-the-hour NPR newscasts may have mentioned Griffin, but those are not transcribed for Nexis. NPR.org offered a perfunctory online story on Wednesday, but I found it in a web search, and couldn't find it in their sections for News or Arts & Life on midday Thursday. ​NPR gave Griffin a nearly 7-minute interview in 2015.