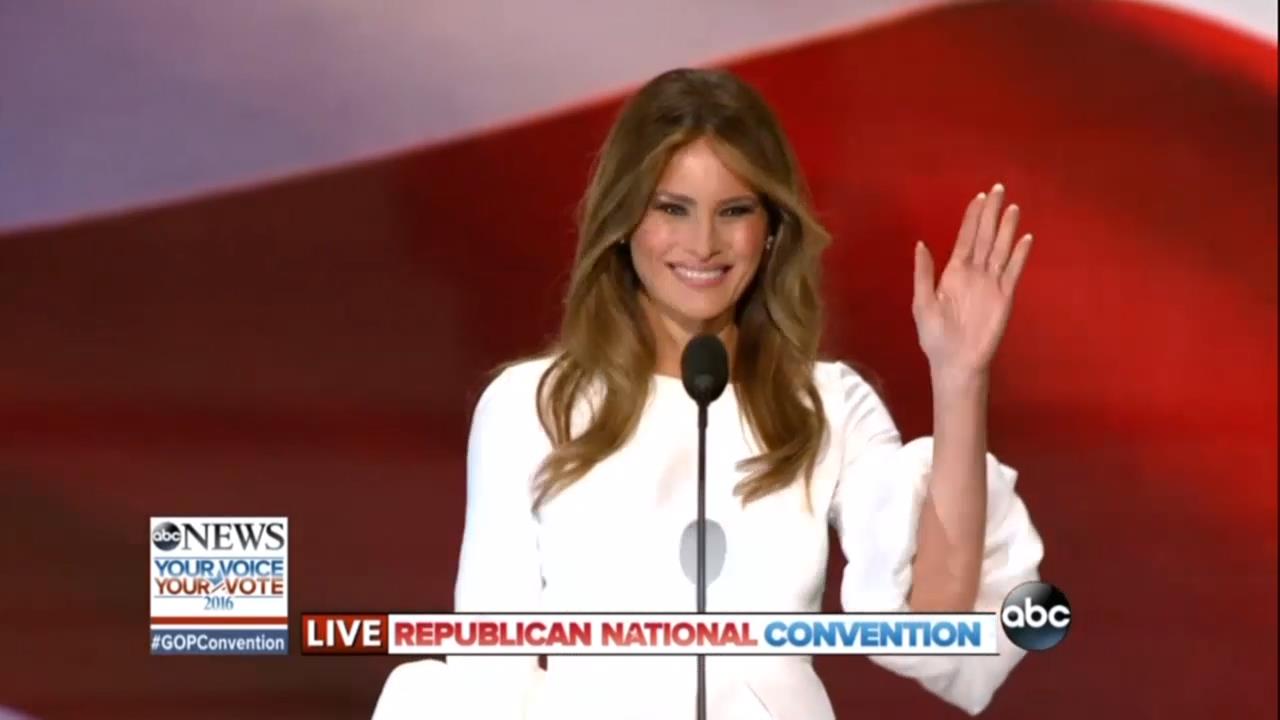 Apparently, Washington Post fashion writer Robin Givhan isn’t the only African-American newspaper dress-grader to drop political bombs into her critiques. Philadelphia Inquirer critic Elizabeth Wellington loved Melania Trump’s white dress: “[O]n a strictly fashion note, the white sheath with its fluted sleeves and very cool exposed zipper down the back made for an exquisitely put together if not angelic look.”

But on a strictly political note, it  was a "scary statement," said the headline. It apparently underlines her husband’s view that “white is always right.” She was a “not-so-subliminal billboard for what’s looking like the Trumpian view of an ideal America.”

[Melania] Trump’s foreignness stands in stark contrast to her husband’s “Make America Safe Again” and “Make America Great Again” sloganeering, which he plans to accomplish with his anti-immigrant, anti-Muslim, anti-Black Lives Matter platform. In other words, anti-all things brown, as some might say.

(That is, unless you have a speech to write: First lady Michelle Obama is clearly your girl, according to reports that Trump lifted entire  parts of her speech from Obama’s 2008 Democratic National Convention speech.) It also should be noted here that dress sold out within a few hours of the speech, something else Melania Trump has in common with Michelle Obama.

So while Trump appeared flawless on the Cleveland stage Monday night, whether she intended it or not, her all-white ensemble displayed the kind of foreignness that is accepted by her husband’s political party. To many, that outfit could be another reminder that in the G.O.P. white is always right.

Four years ago, Republicans fretted about trying to diversify their base, in the wake of Barack Obama’s clear voter mandate. This time around, with Trump at the top of the ticket, it’s obvious that ship has sailed. On Monday night, Melania Trump was a not-so-subliminal billboard for what’s looking like the Trumpian view of an ideal America.

And if that’s the fashion statement she intended to make, it’s a very scary one.

Ivanka Trump’s Thursday speech, by contrast, pleased the liberal writer, who loved the dress and the message:

Ivanka Trump was a hit at the Republican National Convention Thursday night with a fantastic pro-woman speech introducing her dad.

She promised to help fight for equal pay and shatter the glass ceiling. As a working woman, these messages spoke to me. That's surprising coming from a party that is usually in opposition to my political views....

Trump's decision to wear a piece from her eponymous label to introduce her dad was not only a fashion win, it was a strategic move; it's clear from her speech that her role was to warm up to women voters, many of whom have felt put off by her father's comments. Even I - a liberal Democrat to my core -  felt like I maybe, just maybe, I might have something in common with Ivanka.