Hillary Clinton's selection of Sen. Tim Kaine (D-Virginia) as her running mate is already creating one distortion of reality: that Kaine is somehow a "centrist." His American Conservative Union rating score in his first three years in the Senate is 0.00. But here was The Wall Street Journal opening up its coverage tonight: 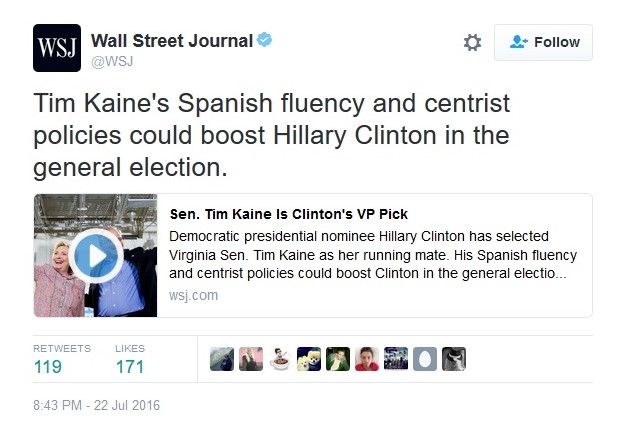 The other distortion is any journalist touting Kaine as a "devout Catholic" or "traditional Catholic" without noting it would be more accurate to call him a devout and traditional Democrat. A "devout" believer in the church would champion in public its pro-life stance and its opposition to redefining traditional marriage.

As Brent Bozell and I recently explained:

Far-left is middle of the road on the media spectrum. The Washington Post has been especially guilty of suggesting over the years that Kaine was as pious as conservative stalwart Ken Cuccinelli, a man they place on the “far right.” In 2012, the Post profile of his GOP opponent George Allen suggested he was seen as a “colossally insensitive brute,” but this is how the Post began a Kaine profile: 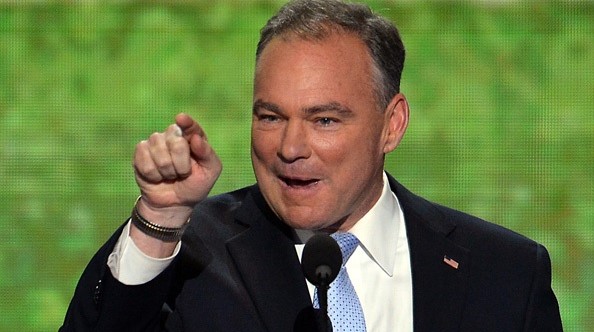 “It’s not unusual, on an election-year Sunday, to find a white candidate in a black church. But Tim Kaine, swaying this month to the gospel groove at St. Elizabeth Catholic Church in a poor Richmond neighborhood, wasn’t on the campaign trail. He was taking a break from it at his home parish.”

Tim Kaine has a perfect 100 score from the NARAL folks, and and perfect 100 with the gay-left Human Rights Campaign. But to the Post, he’s practically the Pope’s right hand, swaying in the pews at Mass. A few weeks ago, Kaine and Warner signed a letter to the HHS Secretary (with other liberals like Barbara Boxer) complaining about insurers failing to provide proper payment for contraceptives through Obamacare.

The Post did this in 2005, too, when Kaine first ran for Governor: “Kaine, the Democratic candidate for governor of Virginia, said that teaching at a fledgling Jesuit school in El Progreso [Honduras] gave his life direction, inspiring him to public service and rekindling his devotion to Catholicism.”

When the Post touts your deep Catholic roots as positive, it probably means you’re a liberal opposed to Catholic orthodoxy.

We borrowed from our colleague Scott Whitlock, who noticed this tendency in a Post profile in 2012 headlined "A Man of Faith and Practical Politics: While Running for Senate in Virginia, Kaine Finds Time to Wrestle With His Conscience." The first three paragraphs of the article by Steve Hendrix touted the pro-choice Democrat's Catholicism:

It’s not unusual, on an election-year Sunday, to find a white candidate in a black church. But Tim Kaine, swaying this month to the gospel groove at St. Elizabeth Catholic Church in a poor Richmond neighborhood, wasn’t on the campaign trail. He was taking a break from it at his home parish.

“How you doing, brother?” said Peter Thompson, 53, a lean black man in a green fedora, hugging the round-faced Kaine on the church steps.

The part-time Pizza Hut cook and the former governor have known each other since Kaine joined the church almost three decades ago. “We helped start the Men’s Group together,” Thompson said.

Hendrix assured readers that "religion saturates both life and politics for Kaine." He added, "A former missionary in rural Honduras, he talks frequently of how Catholicism informs his views on race and poverty and his deep embrace of cultural diversity, which he hails as 'God’s rich tapestry.'"