NY Times Hates 'Theocratic' Pool Hours for Women -- With One Exception, for Muslim 'Me Time'

Seth Lipsky of the New York Post found a dramatic contrast on swimming pools and religious orthodoxy on June 2 (and additionally mocked Monday by James Taranto of The Wall Street Journal). Call it Islamic privilege. The Times can't stand Orthodox Jewish women having sex-segregated swimming hours in a public space....but lauded it for Muslim women in February.

In an editorial entitled “Everybody Into the Pool” on June 1, the Times editorial desk protested: 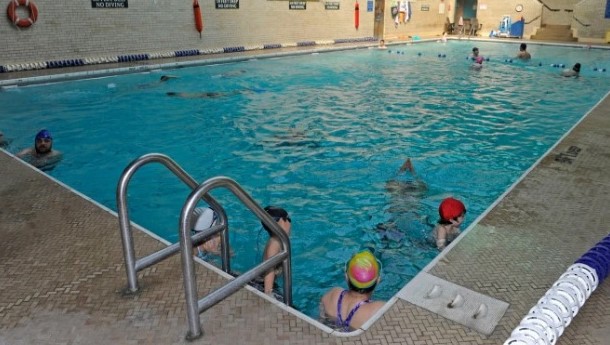 Four times a week this summer — Mondays, Wednesdays and Fridays from 9:15 to 11 a.m., and Sunday afternoons from 2:45 to 4:45 —  a public swimming pool on Bedford Avenue in Brooklyn will be temporarily unmoored [sic] from the laws of New York City and the Constitution, and commonly held principles of fairness and equal access. The pool will instead answer to the religious convictions of one neighborhood group. At those hours, women (and girls, too, on Sundays) will have the pool to themselves. Men and boys will not be permitted. Orthodox Jewish beliefs demand modesty in dress, and a strict separation of the sexes, and those are the beliefs to which the taxpayer-owned-and-operated Metropolitan Recreation Center will yield.”

The Times wasn’t exactly quick on the draw here. This Brooklyn poll has maintained sex-segregated hours since “sometime during the 90s,” according to a spokesman for the parks department. The policy was instituted at the request of Orthodox women, without any fuss. “But a recent anonymous complaint led the city’s Commission on Human Rights to notify the parks department that the policy violated the law.” The Times continued:

The city’s human rights law is quite clear that public accommodations like a swimming pool cannot exclude people based on sex. It allows for exemptions “based on bona fide considerations of public policy,” but this case — with its strong odor of religious intrusion into a secular space — does not seem bona fide at all.

Indeed, what [Assemblyman Dov] Hikind, in a statement, called a “victory for human rights” is in fact a capitulation to a theocratic view of government services.

Lipsky cracked wise: “What’s this ‘odor’ that has penetrated the proboscis of the Times? Maybe it’s from all the chicken fat and onions we Jews use in our cooking. Or my own favorite perfume — eau de lox.”

The Times editorial concluded: “The best solution would be for the city to immediately end religious segregation in the pools, and limit the rules of separation only to practical considerations, like keeping lap swimmers away from splashing children. Let those who cannot abide public, secular rules at a public, secular pool find their own private place to swim when and with whom they see fit.”

Lipsky then recalled a February 29 news article in the Times by Dan Levin that sounded a very, very different note. When Muslim women wanted sex-segregated swimming, there was no “strong odor of religious intrusion into a secular space.” There was no unconstitutional capitulation to a "theocratic view." The headline was "In Toronto, a Neighborhood in Despair Transforms Into a Model of Inclusion."

TORONTO — Her face framed by a yellow hijab, Idil Hassan watched her young daughter splash with other children at the Regent Park Aquatic Center, an architectural jewel of glass, wood and chlorine in the middle of Canada’s largest housing project.

The center has given Ms. Hassan, a 34-year-old nurse, the ability to do something more than just watch her child: she, too, can join in.

On Saturday evenings, mechanized screens shroud the center’s expansive glass walls to create a session that allows only women and girls to relax in the hot tub, swim laps or careen down the water slide, a rare bit of “me” time treasured by many of the neighborhood’s Muslim residents.

“I wouldn’t come before because my religion doesn’t allow women to be seen uncovered by men,” said Ms. Hassan, a Somali immigrant. “It’s really helpful to have that day to be ourselves. I even learned to swim.”

As Canada accepts 25,000 Syrian refugees, the new Regent Park, thick with immigrants from Africa, Asia and the Caribbean, provides a blueprint for successful economic and cultural integration....

Grass-roots participation lies at the heart of Regent Park’s billion-dollar transformation. From the start, the city and the developer incorporated residents’ needs into the design, from ensuring they were not forced out of the neighborhood, to stocking food that met Muslim religious requirements, and scheduling private swimming and yoga classes for women.

“It didn’t happen by itself,” said Sureya Ibrahim, an Ethiopian immigrant and community activist who is Muslim and who has lived in Regent Park for 18 years. “We had to fight to make the redevelopment accessible and inclusive, but now it’s really a model of collaboration.”

The aquatic center reflects that ethos of inclusion. After the weekly women’s swim ends, the blinds stay down for a private session popular with transgender people who want to swim without feeling they are being stared at.