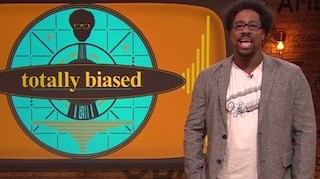 NPR titled its Bell interview “Standing Tall And Finding Humor In America's Racism.” He realizes he brings an ideology to the proceedings. He described his marriage to a white woman like this: “there's certainly a white feminist ideology and a black man race ideology that we sort of collaborated on and turned into two children.”

At least Bell knows what he’s making isn’t “journalism” in any traditional sense, but he's trying to fit into the recent CNN mold:

BELL:  I've always been a fan of [Anthony] Bourdain from back in the day and Mike Rowe and Morgan Spurlock and that sort of, like, new style of journalism. Like, not really journalism, like, a person with a big personality who's got curiosity and questions -- I've always been a fan of that. And I always thought if I had a show like that, you basically would replace food with racism (laughter).

You know, you would take the -- you know, instead of, like, sampling the food I would sample the racism or the culture. So I've always been a fan of that. And so when Totally Biased was canceled, there was a period where I thought my career was over. But then I got these meetings at different networks and news networks, and they had -- somebody had pitched them a show at that point called Black Man, White America where a comedian -- a black comedian -- would travel around to white places. And I was like, well, what do you do after the fourth episode? You know -- we're back at the country club. And so I was like, if I did that show, I'd want to travel around to all sorts of different places that I was either afraid to go or you wouldn't expect me to go. I sort of put that spin on it, and luckily the production company who pitched to CNN liked that, and they renamed the idea United Shades Of America, which is a much better title than Black Man, White America, because this is not the 1990s. And this is where we are now.

Gross walked him through the idea that while hanging out with the KKK might have seemed edgy and humorous after it was done, it must have been a little terrifying, like witnessing a cross burning:

BELL:  I was very aware that in that moment that, like, I don't know -- certainly the overwhelming percentage of black people who've been present for those things did not escape alive. And if they did escape, it's 'cause they escaped, not 'cause they said goodbye, all, nice talking to you. And that's what's important to me about this scene and showing why CNN is such a good partner for this 'cause they don't need it to be funny all the time. They know I'm a comedian, but they also hired me because I'm a comedian who has -- likes to think big thoughts and ask big questions. Even if I can't figure those big things out, I'm at least investigating those things. So it felt great that I -- we didn't have to end the show on a laugh even though it's a show hosted by a comedian.

No one expected NPR to ask a less-than-fawning question, such as: Is it possible you and CNN are providing the oxygen of publicity to the KKK that actually helps them from collapsing into total obscurity? Perhaps their threat is being exaggerated, like the depths of white America's racism? Try addressing that big thought.

Or this one: In a pitch meeting, would CNN ever like the opposite of this pitch? Let's send a white comedian into minority neighborhoods to make fun of the Nation of Islam? Or hang out with Jeremiah Wright? Let's send a white guy into a house full of illegal aliens, how wacky is that? This only underlines that CNN and NPR are liberals only like comedy -- or in this case, alleged "comedy-slash-BigThoughts" -- that challenges whites and their "privilege."

But then came the “humor” of comparing police officers to mountain lions. (Are your sides splitting yet? If not, you’re not NPR-listener material.)

BELL: I forgot about that. Good one, me.

GROSS: Yeah, good one (laughter). I'm really glad you have your new CNN series. I really like it a lot.

BELL: There's a lot of love out there for me with that. I really appreciate it. People are happy. They're like, yay, you're back on TV (laughter).

GROSS: Exactly, yes. No, exactly. And I was really disappointed when Totally Biased was canceled. Were you depressed afterwards?

When the show got canceled, all this sort of love - it became like Woodstock. More people claimed they were there than who were clearly there. And so it suddenly became - like, all these articles were written up about it and all this love. And now there's a narrative about it that I've been able to embrace of like, yes, that's right, another African-American folktale. You know, like The Man can't handle my truth bomb. So, like, it became this thing where it's like I can sort of sit on top of the legend of the show and not actually be sort of crushed by the weight of the show.

"The Man can't handle my truth bomb." That's pretty funny. "The Man" keeps handing you big money to make a show that flops. The beauty of having a show on CNN is no one can really say it's failing when they compare it to the ratings of everything else on the channel.