P.C. PBS Promotes 'LGBTQ Rights,' Like 'Protections' for Men in the Ladies' Restroom

The PBS NewsHour is nothing if not sensitive to the “LGBT community.” A Thursday night segment drew the online headline “How North Carolina signed a bill dubbed the most anti-LGBT law in the U.S.” Or, as the gay-left site Towleroad gushed over it, “PBS News Hour Takes Apart North Carolina’s Anti-LGBT Law: WATCH”.

The PBS anchor on this story was John Yang, an openly gay journalist who gave advice about being “Out on the Air” at last year’s convention of the activist National Lesbian and Gay Journalists Association.  The guests were Time Warner Cable reporter Loretta Boniti and Dominic Holden, “national LGBT reporter for BuzzFeed news.”

Those opposed to say, letting men who “identify” as female use the ladies restroom, were barely noticed.

SARAH PRESTON, ACLU of North Carolina: Half of the transgender individuals surveyed in North Carolina recently reported being harassed in public accommodations.

CHLOE JEFFERSON, Student: What about my rights to privacy and wishes not to be exposed to young males changing and showering beside me?

YANG: Late Wednesday night, Republican Governor Pat McCrory signed it into law, saying in a statement that Charlotte violated “the basic expectation of privacy in the most personal of settings, a restroom or locker room.” He accused the leaders of the state’s largest city of government overreach and intrusion. Charlotte Mayor Jennifer Roberts, a Democrat, fired back.

MAYOR JENNIFER ROBERTS (D), Charlotte, NC: This legislation is literally the most anti-LGBT legislation in the country. And it does this not just in Charlotte, but all across our state.

YANG: Activists and legal rights groups, like the ACLU, say they’re already exploring a court challenge to the law.

Notice how PBS uses all the usual leftist lingo. Their progressive groups are merely “legal rights groups” fighting for what Yang called an “anti-discrimination law” that “expanded protections for LGBTQ people, including letting transgender people choose which bathroom to use.” 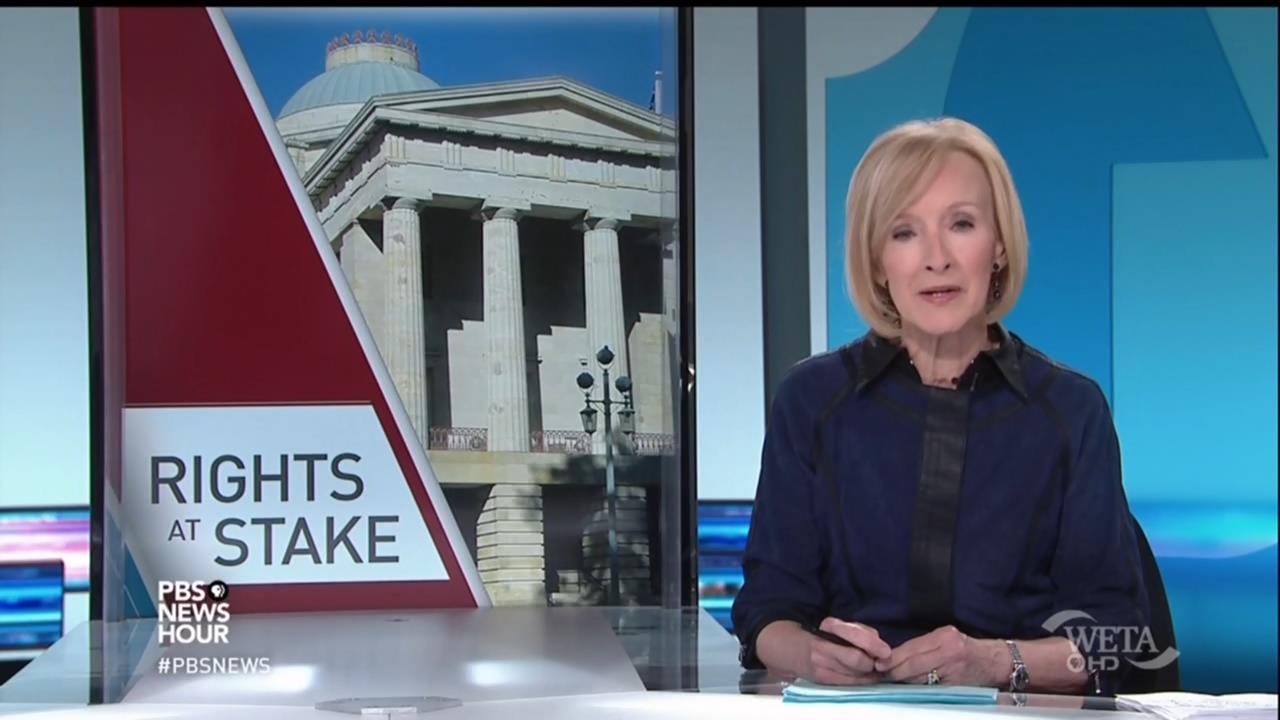 Woodruff also began the segment by calling pro-gay measures “protections”:  “We turn now to North Carolina, where a new measure restricting protections for gay, lesbian, bisexual, and transgender people is being called the toughest law of its kind in the nation.”

And by contrast, Holden said conservative bills “target LGBT people,” and we know how liberal journalists think the word “target” means “in your gun sights.”

HOLDEN: There were more than 100 bills filed that target LGBT people in some way, an unprecedented number, and that is seen as a backlash to the decision last year by the U.S. Supreme Court, which allowed marriage in all 50 states between same-sex couples.

Then Holden really abused the language, suggesting conservatives favor “banning students from school restrooms.” I guess they’ll have to hold it until school’s out?

HOLDEN: ....the second one about banning students from school restrooms is the first of its kind in the entire country. And there are questions then raised about what this means legally for the state. The Obama administration has said that civil rights laws ban that sort of discrimination against transgender people in schools, and so this seems like it’s ripe for a legal challenge.

Yang kept the PC lingo going asking if this is the new frontier for “LGBTQ rights.” The PC crowd may faint: He left out “Intersex” and “Asexual”! Why can't PBS go all the way to LGBTQIA?

JOHN YANG: Dominic, you mentioned the same-sex marriage decision by the Supreme Court last year. We have also seen gays in the military issue being resolved. Is this now the new battleground for LGBTQ rights in state legislatures over issues like this?

DOMINIC HOLDEN: After marriage equality, there’s no question that the primary interests of the LGBT movement is to pass nondiscrimination protections federally.

Where they’re running into problems is on the local level with this issue about bathrooms. But it’s important to note that in the 200 cities and 17 states with laws like this already on the books, there are no examples documented of someone using it for nefarious purposes, of a transgender person who is this sex predator in the bathroom.

It’s got no factual foothold. If anything, the irony in this is that it actually would require — and North Carolina now requires transgender men who have beards, who are muscular, to use the women’s restroom. So it actually creates the very problem that it claims to solve.

Well, there's this one from Canada. And the feminist-activist site Gender Trender assembled quite a pile of stories to consider.

Holden took to Twitter to thank PBS for letting him please the gay-left activists like Towleroad for "taking apart" the conservatives: 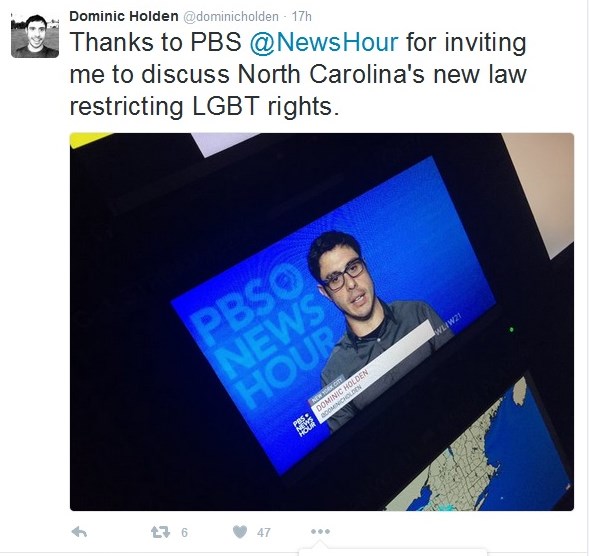