Paul Bond at The Hollywood Reporter relayed that a representative of the conservative National Center for Public Policy Research challenged Disney CEO Bob Iger at a shareholders meeting about the network’s liberal bias. Iger insisted that former Clinton publicist George Stephanopoulos – who didn’t help any attempt to appear nonpartisan by donating $75,000 to the Clinton Foundation – was unbiased. 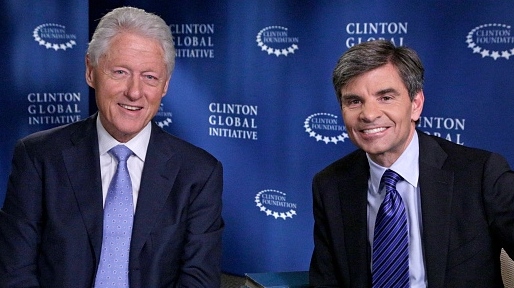 "We're well aware of the George Stephanopoulos situation. I watch George often. George is a person of integrity ... we believe that George is presenting to his public a fair and unbiased look at news," he said.

Iger said he saw the anchor interview the various presidential candidates and he was satisfied the interviews were fair.

"He seems to be equally aggressive in terms of looking for criticism, looking for applause, demanding facts and opinions from all of them. I assure you, if we felt George was not presenting it fairly or were bias[ed], he would not be on our air," he said. "It's something we take very, very seriously, and we monitor closely."

The shareholder reminded Iger that he asked the CEO to ensure ABC News was free from bias at the annual meeting three years ago, and he wanted to know "one concrete step" Iger took to meet that goal. He said polls still show consumers view broadcast news as liberally biased. Iger, though, rejected the premise.

It was the old and lame “bias is in the eye of the conservative beholder” argument:

"People with one very specific set of beliefs or political opinions may view a lot of what is presented across numerous networks as not consistent with their own beliefs, and I guess it would be their conclusion that that would be bias," he said.

In reality, Stephanopoulos often pulls punches when he interviews Hillary Clinton, and does not demonstrate the "integrity" of reminding viewers of his donations to her "charity."

In his own personal and professional life, Iger is a routine Democratic donor, to Hillary Clinton, Chuck Schumer, and the Obama inauguration, among other gifts.

In 2014, Amy Ridenour of the National Center explained Iger chose not to apologize for ABC's role as an enabler for White House ObamaCare spin and its lack of interest in the IRS scandal, saying in part,

I actually stand by ABC News, who I believe not only presents the news in a fair and balanced manner, but behaves in a high integrity kind of way. While there are times that critics have come forward and pointed out mistakes they have made, overall, the quality of our news is something we should be proud of.

Iger was in full-on ostrich mode with his head in the sand about systemic liberal bias within the company. Iger insisted that ABC News and ESPN were. "overall...fair and unbiased and accurate."

"I firmly stand behind the integrity of our news organizations," Iger insisted, although he offered that "at times" the network has "either presented the news in slightly inaccurate ways through mistakes or in ways that we weren't necessarily proud of."